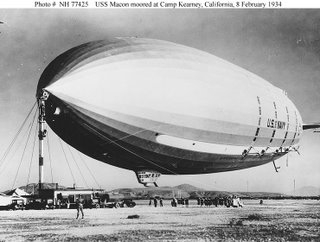 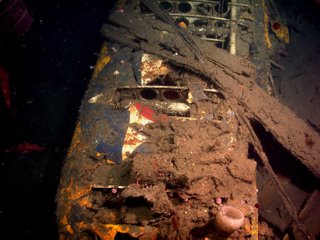 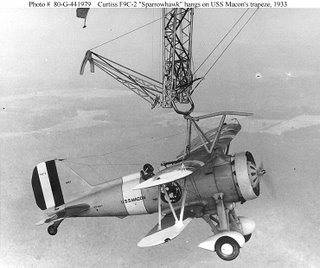 USS Macon was a U.S.Navy dirigable that crashed and sank off the California coast in 1935.

Researchers have now sent a remotely piloted vehicle to the site to explore the debris field as set out here:

Over the course of a five-day archeological investigation, researchers from the NOAA National Marine Sanctuary Program, the Monterey Bay Aquarium Research Institute, the University of New Hampshire and Stanford University have documented two major debris fields associated with the submerged wreck site of the rigid airship USS Macon, a U.S. Navy dirigible lost off California's Big Sur coast in 1935.
***
Distinguishable features included the airship's hangar bay containing four Sparrowhawk biplanes and their detached landing gear. Five of the Macon's eight German-built Maybach 12 cylinder gasoline engines also were identified. Objects from the ship's galley were found, including two sections of the aluminum stove, propane tanks that supplied fuel for it, and the enlisted men's dining table and bench. A second debris field contained the Macon's bow section including the mooring mast receptacle assembly. This field also contains aluminum chairs and desks that may have been in a port side officers' or meteorologist's office.

More pictures at the link.

Second photo is "a port wing of one of four Curtiss Sparrowhawk F9C-2 biplanes found at the USS Macon site. Credit “NOAA / MBARI.”