Wonder what happened to the "Al Qaeda Diving Team?" 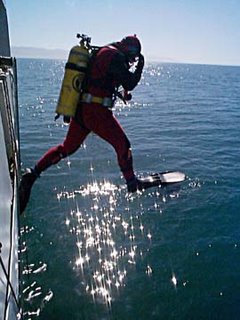 It was only couple of years ago that it seemed like every 6 months we'd get a warning about AQ terrorist scuda divers. Some were based on articles such as Fears Persist of Al Qaeda Terrorist Link to PADI Dive Center:

The guys around the scuba school laughingly called them the "Al Qaeda Diving Team."

But for law enforcement officials, it was no joke.

Late last year, Dutch counter-terrorism agents investigating a possible Al Qaeda recruitment cell grew interested in the school because a man suspected of recruiting terrorists had become a certified diver and studied to be an instructor there. Iraqi-born Kasim Ali was one of between 50 and 150 Muslim men who had taken classes in recent years with the same Tunisian instructor at the school in the city of Eindhoven, about 70 miles southeast of Amsterdam.

By the way, the site is worth visiting for the graphic appearing above the article alone.

It appears that some people are taking the potential threat seriously. See here:

Acoustech Corp. of Philadelphia and FarSounder Inc. of Providence, R.I., received Homeland Security grants to develop systems that can detect underwater threats such as divers with explosives.

"Ever since the Department of Homeland Security was put into place, our business has gone up," said James McConnell of Acoustech. The three-person company expects revenue of $900,000 this year.

Systems from other vendors currently cost about $1 million, so the companies are trying to make systems that would be more affordable for the nation's port authorities and other waterfront facilities, such as power plants and oil refineries.

"We've had a lot of customers calling and asking for a solution to the problem," said FarSounder's founder, Matthew Zimmerman.

See earlier posts on AQ divers here and here. And a counter to your fears from a real frogman (SEAL Froggy of Froggyruminations and now at Blackfive) here.

Much of the $31 million will go for cameras and gadgetry designed to detect scuba divers, pedestrians and drivers who may intend to carry out an attack, according to the grant applications.

About 250 cameras that can pan, tilt and zoom will be installed along the channel, highways and perimeters of industrial sites, supplementing an existing camera system.

Also on the purchase list are thermal imagers, which can detect people moving at night, 15-20 radar units and sonar equipment to detect divers and other underwater threats.

The monitoring will be mostly automated, with new software programmed to alert security personnel to possible intruders.

The Coast Guard will continue requiring that recreational boats obtain permission before entering industrial parts of the channel, making it easier for the cameras to identify unauthorized vessels.

Much of the new equipment will be installed in port and county-owned areas not now under surveillance by channel industry. Many channel facilities have "very robust" security systems of their own, Bellamy said.