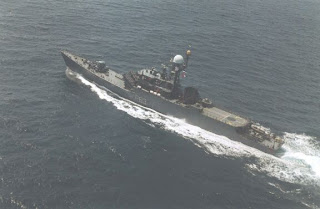 The Indian Navy is awaiting the government’s nod to provide escort to ships carrying life-saving assistance to Somalia under the aegis of the United Nations, a senior naval official said.“The navy’s request to protect the UN shipments from pirates is with the government. The Indian Navy is ready and keen to provide its assistance in the UN food programme as it will enhance our credentials as a professional navy in the region,” the senior navy official told IANS Thursday.

The UN’s World Food Programme (WFP) is responding to urgent humanitarian needs in Somalia. Over 2.4 million Somalis rely on food aid, of which 80 percent arrives by sea.

Food supplies are urgently needed in Somalia but danger posed by pirates has made delivery difficult by land and sea routes. In July the WFP had appealed to naval powers to help protect its ships carrying life-saving assistance from pirate attacks, saying that as many as two million Somalis could go hungry without this essential help.

“We cannot claim to be a power with global impact if we do not take up responsibilities. We are ready to protect the ships passing through the Mozambique Channel (between Madagascar and South east Africa) which is plagued by piracy,” the official added.