NPR does a nice job here with a discussion of the pirates of Somalia plying their trade in the Gulf of Aden:

The International Maritime Bureau, a Malaysia-based agency which tracks piracy world-wide, says the some pirates appear to be using "mother ships," to bring their speed-boat crews out into the sea lanes where they can attack.
The United Nations passed a resolution in June authorizing "all necessary means" to repress piracy in the region, allowing foreign warships to enter Somalia's territorial waters in pursuit of pirates. The resolution acknowledged that Somalia has no power to interdict pirates or patrol its own coast. In fact, the country has not had a central government with any significant power since warlords overthrew dictator Mohamed Siad Barre in 1991.
But shipping companies and piracy experts say that so far, the nations that have the military power to take action under the U.N. mandate, haven't done so. "The U.N. Resolution has done nothing to prevent these attacks," says Pottengal Mukundan, the director of Commercial Crime Services for the International Chamber of Commerce.
There is a coalition naval force in the region, composed of ships from the U.S., Canada, Britain, France, Germany and Pakistan, which is reportedly tracking the hijacked vessels. But Mukundan says that once a vessel has been taken, it's too late for military action that would further endanger the crew.

To all ships transiting the Gulf of Aden

Within the last 48 hours four ships have been attacked and hijacked by armed pirates in the vicinity 13 / 14 degrees north and 046 / 051 degrees east. All ships are strongly advised to maintain a strict visual and radar watch.

Early detection will allow ships to take measures to prevent boarding and request for assistance.

All attacks and suspicious sightings should be reported to the IMB Piracy Reporting Centre,
Tel: +603 2031 0014 (24 hours)
Email: imbkl@icc-ccs.org

Intelligence sources revealed that there are now two suspicious trawlers in the Gulf of Aden believed to be pirate mother vessels looking to attack ships with the intent to hijack.

The description of the suspected trawlers - long white, Russian made stern trawlers with names "BURUM OCEAN or ARENA or ATHENA". One of the trawlers is believed to be operating at approximately 60 NM NE of Bossasso, Somalia in the Gulf of Aden.

All ships are strongly advised to maintain a strict 24 hours visual and radar watch while transiting these waters and report any attacks or suspicious boats including the trawlers named above to the 24 hour IMB PRC. Tel: +603 2031 0014 / +603 2078 5763 email: piracy@icc-ccs.org

The "Barum Ocean" is pictured above. A picture of what may be the "Arena" or "Athena" is shown below: 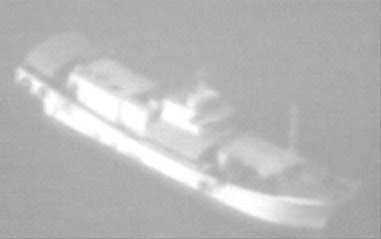