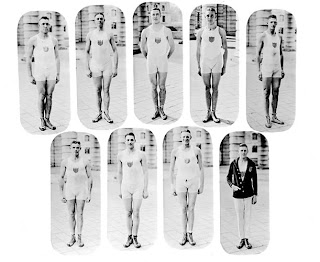 It was the greatest sports upset of its day:

In our time this upset would be akin to the United State beating the Russian hockey team in the "Miracle on Ice." Or, because of the origin of the sport, the win is as unbelievable as Liechtenstein beating basketball's Dream Team.

The year was 1920. The location was Antwerp, Belgium. The sport had been dominated by the British for 200 years. Then came the team from the United States Naval Academy.

The event was rowing - the Olympic Eights more specifically.

The team members were not sons of great, wealthy families. They were not sons of Harvard or Yale. They were midshipmen at the Naval Academy. Some of the crew came from land-locked states. Their coach was a former fisherman and sparring partner of John L. Sullivan who happened to have a knack for coaching rowing. For sixteen years he worked to establish the Naval Academy as a force in rowing.

At the time, rowing was a major college sport - on a par with football - indeed, rowing was the first American intercollegiate sport (Yale and Harvard) and there were numerous rowing clubs in major U.S. cities.

But these clubs and teams followed British tradition. The coach at Navy, Richard Glendon changed that, developing American boats (shells) and oars and even developing a uniquely American rowing style.

That the British tradition was strong make sense, since one of the most remarkable sporting events in England was the Henley Royal Regatta, based somewhat on the ancient rowed warships and on later races among the crews of Royal Navy ships and, probably more relevantly, on "The Boat Race" between the universities of Oxford and Cambridge, first started in 1829.

From the university teams sprang private club teams such as England's Leander - home to champions. In the U.S. grew Vesper and many others.

Glendon changed all that- first by modifying the stroke of the oarsmen into the "American Orthodox stroke."

Glendon had rowed fishing boats at sea. He had spent years observing crews and he had an insight - what mattered most in rowing was the "arc nearest the right angle" - that area where a oarsman's oar was capable of providing forward power - and cutting the stroke down so that the power cycle was shortened into a "prying" motion as opposed to the classic English "swinging" motion(a more complete explanation is available in Sarah Saint Sing's The Wonder Crew upon which much of this post is based). 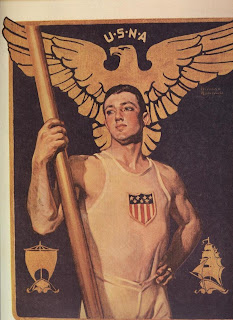 describe the 1920 Naval Academy team as, "eight husky giants." Norman Rockwell created a portrait of one of these giants which can be seen nearby. The 1920 eight crew were, by all accounts, strapping young men.

Leander, the premier British team, had the classic British approach.

When the time came to select a crew to row in the 1920 Antwerp Olympics, Leander was the British selection. In the United States, it came down to a race between Glendon's giants and the crew from Syracuse (which had beaten Navy earlier in the year). On July 24, 1920, the Navy team beat Syracuse and won the national and intercollegiate title and the right to represent the U.S. in the upcoming Olympics Games.

In anticipation, the former armored cruiser Frederick was coaled and readied for the trans-Atlantic trip. 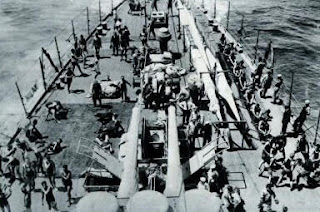 The 60-foot long shells were laid out on deck. In addition to the Navy rowers, other Navy and Army Olympians were on board. Across the sea Frederick dashed. On arrival a smaller boat was procured to carry the rowing shells up to the regatta site - a section of a canal. 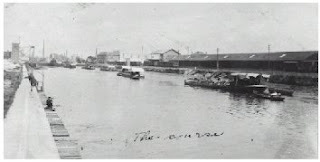 In a few days, the Americans would challenge the British team's domination of the sport of rowing. First came the preliminaries, but finally came the moment - the upstart Americans once again challenging the leader of world.

August 29, 1920. The U.S. crew of Jordan, Moore, Gallagher, Jacomini, Graves, King, Sanborn, Johnston with their coxswain Clark and their coach Glendon, prepared their boat. The British Leander team joined them at the starting line.

In a little over 6 minutes, the Americans beat the British crew across the line. 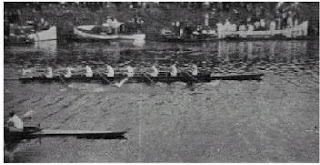 Another American revolution succeeded. The Navy team, with its unique style had upset the favorites and won gold. 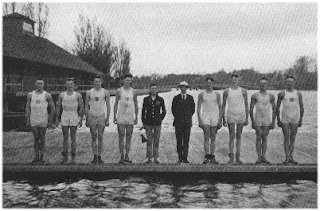 The Navy team returned home as heroes with honors including a ticker tape parade in New York City.

Such glory is short-lived, however, but for one remaining consequence - the United States then went on the longest winning streak in Olympics history - a 40 year period in which the U.S. eights team won every gold medal. As set out here 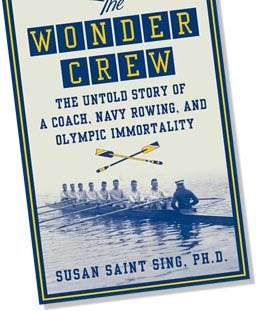