Fighting Somalia Pirates: The limits of the "1000 Ship Navy" 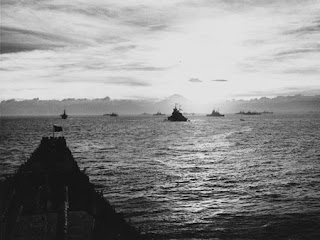 Let's review the problem:
Now, there is more news. Touching on matters raised here and here, Galrahn at Information Dissemination reports in 5th Fleet Focus: Naval Forces Ordered To Horn of Africa, that a portion of the 5th Fleet will be going pirate hunting - maybe. As Galrahn sees it:

Despite the rhetoric otherwise, allow us to speak to the realistic position that the US Navy does not have the resources to manage the pirate problem off Somalia short of dedicating a major strike group to the effort, which they will not, and even then we don't believe the Navy would be that effective in much else than deterrence. The US Navy is built to fight a war, and is not structured well at all to manage peace.

While it is the understatement of the year to suggest the US Navy can sweep the seas of every pirate they can find, the suggestion that the US Navy is going to saturate the coast of Somalia with sufficient resources to actually find pirates in the several million square miles of threatened waters is laughable. Besides, it is unlikely piracy is the only reason the US is moving naval forces towards Somalia anyway.

Absolutely no one is coming to offer immediate help, though the French and Spanish are out looking for volunteers for an EU force. Both countries having had recent experience with Somalia pirates, it seems to have caught at least part their attention.

But they're talking October. Maybe.

Once upon a time, U.S. Navy CNO now CJCS Admiral Mullen offered up the concept of a "1,000 ship navy":

Mullen summed up the Thousand-Ship Navy concept in an opinion piece published Oct. 29 in The Honolulu Advertiser newspaper: “[The fleet is] a global maritime partnership that unites maritime forces, port operators, commercial shippers, and international, governmental and nongovernmental agencies to address mutual concerns.

“Membership in this ‘navy’ is purely voluntary and would have no legal or encumbering ties. It would be a free-form, self-organizing network of maritime partners — good neighbors interested in using the power of the sea to unite, rather than to divide. The barriers for entry are low. Respect for sovereignty is high.”

The name itself captures the scope of the effort. It’s not actually about having 1,000 international ships at sea. It’s more about capabilities. Everyone brings what they can, when they can, for as long they can.

It occurs to me that Somalia is a test case of that "1,000 ship" concept and a lesson in one of the problems of coalition operations. Everyone agreed that providing escorts for WFP shipping is a grand idea but only three nations committed to the operation and they stayed as long as they could. That leaves 997 ships which are not being deployed...and a whole lot of countries who have decided to "let George do it."

At least the French and Spanish are raising the issue, but as a warning for future adventures with a coalition "1000 ship navy" it might be a good idea to figure that in the case of an immediate need the first 300 or so ships are not coming from allies. And the others will be really, really late in arriving.
Posted by Mark Tempest at 8/05/2008 08:00:00 AM