Somalia: Canada to step in as escort provider 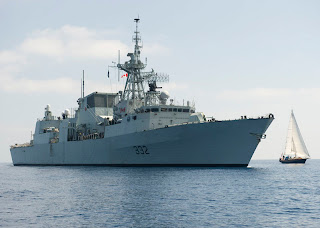 Canada looks like it will take on escort duty for World Food Program shipping, it is reported here:

Canada is making plans to send a Halifax-based frigate to waters off the horn of Africa to stop pirates from attacking food shipments bound for Somalia.

This would involve diverting HMCS Ville de Quebec, which left Halifax last month for a 5½-month NATO mission to the Mediterranean and Black seas.

Defence Minister Peter MacKay had hinted Monday that there would be an announcement in Halifax on Tuesday about sending a warship on a United Nations mission. But on Tuesday, his spokesman said the announcement had been postponed and the department wouldn’t provide any details.

"My links are all telling me there’s going to be an announcement that the Ville de Quebec will be taken from NATO’s standing maritime group and sent to (waters) off Somalia to escort World Food Programme relief supplies to Somalia," said Eric Lerhe, a retired commodore who is a member of Dalhousie University’s Centre for Foreign Policy Studies.

While he was hopeful that is the case, Peter Smerdon, a spokesman for the UN World Food Programme, could not confirm Tuesday that the Canadian frigate will be sent to waters off Somalia.

"Food supplies are urgently needed in Somalia but deteriorating security has made delivery difficult by land and sea," MacKay said in a release.

That leaves 996 ships available from "the 1000 ship navy." And possibly will prevent the deaths of tens of thousands of Somalis by allowing food to flow past the Somali pirates.

I wonder what the Rules of Engagement are.