Sunday Ship History: Update on the LST with a Sail 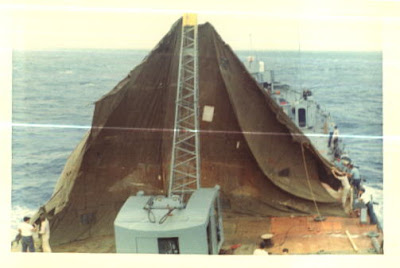 In Sunday Ship History: Tank Landing Ships (I), I included the nearby photo of an LST that had, for reasons unknown to me, taken to sail:

Picture of 40 man army tent the Hickman County Hoisted when the engines failed.1968.

11/27/68: We are one week out of Guam. Lost a generator and one main engine. We Rigged a 50-man tent as a sail to add power using the boom of the crawler crane as a mast. The wind changed during the night and we had to take the tent down. The weather has been rough and we had 6" of water sloshing around in the head and a foot of water in the tank deck.

In addition, the site contains a Stars & Stripes article:

About 400 miles south of Japan the trip from Guam had been exceedingly rough. One of the ship's two main engines broke down. Unless something could be done, the ship would be several days late, at least, on her scheduled arrival in Yokosuka, where the crew was slated to undergo refresher training. Lt, Mike D. Bickel skipper, called a huddle with his first lieutenant, Lt. (jg) Jim Seguin and Boatswain's Mates Third James Woodard, William Moore and Robbie Asberry. Something simply had to be done. Somebody remembered that the executive officer, Lt. John Faricy, who has a habit of acquiring rare things, had come across the 20-man Army tent while ashore in Vietnam...

Mr. Hickman adds more to the tale in the email he sent to me:

We had just finished a mini-overhaul in Guam. We had the engines rebuilt, some hull plates replaced, radio shack work, and general maintenance / repairs that could be accomplished in approximately 30 days. Our ship had been assigned in-county duty on the rivers of Vietnam, arriving July 1965. The squadron, Landing Ship Squadron Two was disbanded in September 1969, and the ships were either sent back to the states for decommissioning, or as in the case of the 825, given to the Philippine Navy (Oct 1, 1969). I came aboard July 1, 1968 and departed August 15, 1969.

Basically, as the article states, we were en-route from Guam to Japan (to load war supplies for Nam) and we started having engine problems. We were running along and both main engines shut down about the same time, turned out the biggest
problem was fuel contamination. If I remember right, they did not get the tanks cleaned properly after working on them in Guam, and the filters and lines clogged up. Enginemen busted their humps and finally got One engine on line, at
reduced power and we started limping along. Being an in-country ship, we only got R&R when something broke and was a critical to our mission repair. So needless to say, the crew was a bunch of crazy types, and you never knew what they would do, or turn up with. So, one time up in either Can Tho, or Ving Long, our XO takes off and no one sees him for quite a few hours, and when he comes back he has this 40 man army tent. To this day, no one really knows why he brought back a tent, speculation was due to large consumption of alcohol and a trade with some army guy that was just to good to be true (to a drunk).

General Navy BS, being what it is, one of the BM's, being a wise guy said "We should hang the XO's tent from the crane and sail into Japan". Being the good sailors we were, and having a bit of pirate in us, the more it was laughed about, the better it sounded -- and the rest is history.

Believe it or not -- we actually picked up a couple of knots when the wind was blowing.

U.S. sailor ingenuity applied to get the mission accomplished... and know we know the rest of the story about the LST with a sail - with a 20 or 40 or 50 man Army tent.