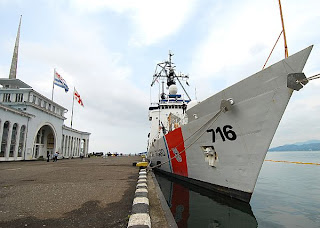 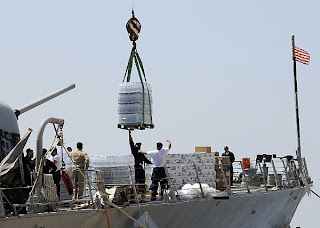 "The crew of Dallas really wants these goods to make a difference in the lives of the Georgian people," said Capt. Robert Wagner, commanding officer of Dallas. "When we received the order to deliver these supplies, the men and women of this ship responded quickly at every turn."

USS McFaul (DDG 74) arrived in Batumi Aug. 24 delivering 155,000 pounds of aid to Georgia. USS Mount Whitney (LCC/JCC 20) is scheduled to deploy for Georgia at the end of the month with more supplies. U.S. Navy C-9, C-40 and C-130 aircraft have flown tens of thousands of hygiene kits and more than 30 tons of meals ready-to-eat into the country during the past week.

BATUMI, Georgia (Aug. 27, 2008) The U.S. Coast Guard Cutter Dallas (WHEC 716) sits in port shortly before the off-load of more than 76,000 pounds of humanitarian assistance supplies to be given to the people of Georgia has finished. The humanitarian supplies are brought in response to the request of the government of the Republic of Georgia. Dallas is part of Combined Task Force 367; the maritime element of the U.S. humanitarian assistance mission to Georgia. (U.S. Navy photo by Mass Communication Specialist 3rd Class Eddie Harrison/Released)

SOUDA BAY, Crete (Aug. 20, 2008) Bottled water is loaded aboard the guided-missile destroyer USS McFaul (DDG 74). Nearly 55 tons of supplies were loaded as part of the humanitarian assistance for the Republic of Georgia following the conflict between Russian and Georgian forces. The assistance will aid in alleviating human suffering in the Republic of Georgia. (U.S. Navy photo by Paul Farley/Released)