A global maritime watchdog says pirates have seized a Malaysian tanker with more than 20 crew in the Gulf of Eden off the coast of Somalia.

Choong said Wednesday that a warship has been sent to intercept the tanker, which is currently heading toward Somalia territorial waters, adding that this marked the fourth hijacking in Somalia within a month. 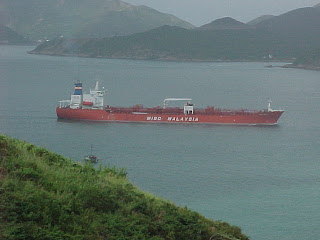 UPDATE: More information flows in - a reportthat the latest capture is a "palm oil tanker:

The Bunga Melati Dua, with a crew of 39, was headed toward Rotterdam in the Netherlands from Indonesia when it was seized in the Gulf of Aden yesterday, MISC said in a statement. The ship's crew included 29 Malaysians and 10 Filipinos and it was hijacked at 10:09 p.m. Kuala Lumpur time, the statement said.

Within the past five days, HMCS Ville de Quebec came within about 25 kilometres of two small bulk carriers that had been seized by Somalian pirates.

"On our radar . . . we had two vessels that we knew had been taken by pirates," Cmdr. Chris Dickinson, the warship’s captain, said Tuesday in a telephone interview from the frigate, which is docked in Mombasa, Kenya.

"So the threat is real. It’s almost eerie coming down that coast and seeing a radar contact with a name on it . . . and knowing that those vessels are held by pirates."

The Canadian warship is under orders to stay away from vessels that have already been seized by pirates.

"The crew’s lives are in danger, and ransoms (of millions of dollars) are being demanded from the companies who own them," Cmdr. Dickinson said.