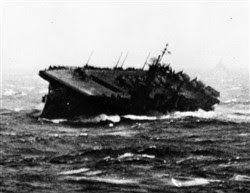 On 17 December 1944, the ships of Task Force 38, seven fleet and six light carriers, eight battleships, 15 cruisers, and about 50 destroyers were operating about 300 miles east of Luzon in the Philippine Sea. The carriers had just completed three days of heavy raids against Japanese airfields, suppressing enemy aircraft during the American amphibious operations against Mindoro in the Philippines. Although the sea had been becoming rougher all day, the nearby cyclonic disturbance gave relatively little warning of its approach. On 18 December, the small but violent typhoon overtook the Task Force while many of the ships were attempting to refuel. Many of the ships were caught near the center of the storm and buffeted by extreme seas and hurricane force winds. Three destroyers, USS Hull, USS Spence, and USS Monaghan, capsized and went down with practically all hands, while a cruiser, five aircraft carriers, and three destroyers suffered serious damage. Approximately 790 officers and men were lost or killed, with another 80 injured. Fires occurred in three carriers when planes broke loose in their hangars and some 146 planes on various ships were lost or damaged beyond economical repair by fires, impact damage, or by being swept overboard. This storm inflicted more damage on the Navy than any storm since the hurricane at Apia, Samoa in 1889. In the aftermath of this deadly storm, the Pacific Fleet established new weather stations in the Caroline Islands and, as they were secured, Manila, Iwo Jima, and Okinawa. In addition, new weather central offices (for coordinating data) were established at Guam and Leyte.

With the conjunction of the Republican Party convention and a hurricane inbound to Louisiana, it's good time to recall a brave man who rose to the occasion, as set out by John J. Kruzel here:

U.S. Naval Historical Society documents and a newly released book, “Halsey’s Typhoon,” by Bob Drury and Tom Clavin, capture the story of a young Navy Lt. Ford who saved lives by helping to put out a fire on the USS Monterey.

In December 1944, Ford, then a Navy lieutenant, was a gunnery officer on the light aircraft carrier, which was providing air cover for the second wave of the Philippines invasion as part of Adm. William Halsey’s Third Fleet.

Serving as deck officer during the ship’s midnight to 4 a.m. watch, Ford saw 40- to 70-foot waves swelling around his ship as it headed into the path of a howling typhoon.

Typhoon Cobra, as the storm was later called, rolled the Monterey 25 degrees, causing Ford to lose his footing and slide toward the edge of the deck, the sources reveal.

The two-inch steel ridge around the edge of the carrier slowed him enough so he could roll and twist into the catwalk below the deck. As he later stated, "I was lucky; I could have easily gone overboard."

At the height of the storm, 100-knot winds and towering waves rocked the Monterey and several fighter planes tore loose from their cables and collided into one another.

The collisions ignited aircraft gas tanks, and soon the hangar deck was ablaze. Because of a quirk in the Monterey’s construction, flames were sucked into the air intakes leading to the lower decks, spreading the fire inside the ship.

Halsey had ordered Monterey’s skipper, Capt. Stuart H. Ingersoll, to abandon ship as the Monterey blazed from stem to stern, they wrote.

Ford stood near the helm, awaiting his orders.

“We can fix this,” Drury and Clavin quoted Ingersoll as saying. With a nod from his skipper, Ford donned a gas mask and led a fire brigade below. All the while, they wrote, aircraft-gas tanks exploded as hose handlers slid across the burning decks.

“Into this furnace, Ford led his men, his first order of business to carry out the dead and injured,” they wrote. “Hours later, he and his team emerged burned and exhausted, but they had put out the fire.”

After the fire, Monterey was declared unfit for service. But historical documents credit Ford’s courage for ensuring that nearly all its men survived to take part in the Battle of Okinawa. 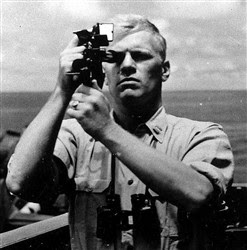 And it nearly made a casualty of the future president.

Ford was later promoted to lieutenant commander, and he ended his Navy career in 1946 at that rank. 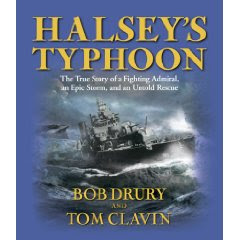 (This article was based in part on information obtained from the U.S. Navy's Web site, and on the book “Halsey’s Typhoon” and a Dec. 28, 2006, New York Times commentary, both by Bob Drury and Tom Clavin.)

In the light of hindsight it is easy to see how any of several measures might have prevented this catastrophe, but it was far less easy a problem at the time for the men who were out there under the heaviest of conflicting responsibilities. The important thing is for it never to happen again; and hence, while it is impracticable herein to go into all the factors involved and the experiences undergone, some of the outstanding lessons will be discussed.

Mr. Ford went on to become the first unelected president of the United States, but once again a steady hand was needed on the helm:

When Gerald R. Ford took the oath of office on August 9, 1974, he declared, "I assume the Presidency under extraordinary circumstances.... This is an hour of history that troubles our minds and hurts our hearts."

He also said: "Our constitution works. Our great republic is a government of laws, not of men."