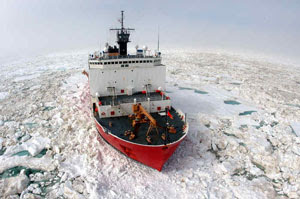 The U.S. Coast Guard has two big, new polar ice breakers. Well, they were new about 30 years ago... and the new realities of the push into the newly accessible, potentially rich Arctic (see here) has the Coasties pointing out they need new ice breakers now!

The National Academy of Sciences, the Coast Guard and others have warned over the past several years that the United States’ two 30-year-old heavy icebreakers, the Polar Sea and Polar Star, and one smaller ice-breaking ship devoted mainly to science, the Healy, are grossly inadequate. Also, the Polar Star is out of service.
***
Adm. Thad W. Allen, the commandant of the Coast Guard, who toured Alaska’s Arctic shores two weeks ago with the homeland security secretary, Michael Chertoff, said that whatever mix of natural and human factors is causing the ice retreats, the Arctic is clearly opening to commerce — and potential conflict and hazards — like never before.

“All I know is, there is water where it didn’t used to be, and I’m responsible for dealing with that,” Admiral Allen said in a recent interview. Given the 8 or 10 years it would take to build even one icebreaker, he added, “I think we’re at a crisis point on making a decision.”

Ice breakers ain't cheap and need a long lead time, as some of us who were around when the current ships were built recall.