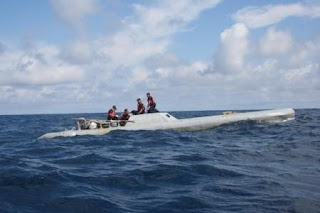 For some time, we've been following the increasing use of submarines and semi-submersibles by drug smugglers (a problem not limited to the Americas -see here involving Spain).

Now, a recent article in Air & Space Power Journal by Admiral James Stavridis titled Semi-submersibles: An Emerging Threat in the Americas is raising the issue again, as evidenced by a report from the Boston Globe.

One key mission of U.S. Southern Command is to help our law enforcement partners interdict large shipments of drugs – primarily cocaine – in the transit zone between the Andean ridge of South America and our country. Most of this moves at least a major part of its long journey by sea. Traditionally, illicit traffickers have hidden large shipments of drugs in commercial maritime cargo and fishing vessels. When law enforcement placed a squeeze on those modes, traffickers simply shifted to hundreds of “go fast” boats to support movement of their valuable cargo, often successfully intermingling with local traffic during peak recreational boating times.

Now there is a new approach – and it is a smart, effective innovation. The latest turn of the wheel seems to be low profile, relatively small (60-80 feet); semi-submerged “submarines” that skim just below the surface and carry tons of cocaine. After seeing just a few in 2006, we are now finding dozens both at sea and under construction

In ever-increasing numbers, these stealthy, pod-like vessels depart expeditionary shipyards nested deep in the dense jungles and estuaries of the Andes region of Latin America. Carefully ballasted and well camouflaged, they ride so low in the water that they are nearly impossible to detect visually or by radar at any range greater than 3,000 yards. Loaded to capacity with tons of drugs they plod steadily and generally unobserved at less than ten knots toward designated drop-off points, depositing their payloads of sorrow and death–translating into thousands of deaths in the USA-- for further transit to global consumer markets.
***
Semi-submersible, low-profile vessels transport drugs for profit, and they do so effectively. It does not take a great leap to imagine what danger awaits us if drug traffickers choose to link trafficking routes and methods with another -- perhaps even more profitable -- payload. In simple terms, if drug cartels can ship up to ten tons of cocaine in a semi-submersible, they can clearly ship or “rent space” to a terrorist organization for a weapon of mass destruction or a high-profile terrorist.

According to the Globe article:

So far this year, the Coast Guard says it has encountered at least 27 such vessels headed toward the southern and western United States, more than in the previous six years combined, while far more are believed to have gone undetected, according to US military and law enforcement officials.

The growing number and increased sophistication of the vessels, officially designated "self-propelled semi-submersibles," has set off alarms at the highest levels of the US military and the federal Department of Homeland Security. Counterterrorism officials fear that what drug runners now use to deliver cocaine, terrorists could one day use to sneak personnel or massive weapons into the United States.

More here from The Economist:

Now it seems the traffickers have perfected the design and manufacture of semi-submersible craft (although they look like submarines, they don't fully submerge). In 2006, American officials say they detected only three; now they are spotting an average of ten a month. 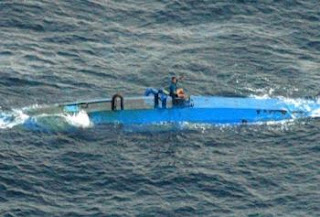 Of those, only one in ten is intercepted. Many sail up the Pacific coast, often far out to sea. With enough cargo space to carry two to five tonnes of cocaine, they also carry large fuel tanks, giving them a range of 2,000 miles (3,200km). They are typically made of fibreglass, powered by a 300/350hp diesel engine and manned by a crew of four. They normally unload their cargo onto fast power boats for the final leg to shore. None has been sighted unloading at ports or beaches.

Congress recently has begun to act to do something about this problem, as set out here:

Drug smugglers who ship tons of cocaine in on handmade subs are about to get the U.S. Coast Guard treatment. Because of a loophole in U.S. maritime law, the orange navy can't stop unflagged ships in international waters, meaning that these little subs and semisubmersibles can float legally right up to our waters. But new legislation OK'd this week in the House and set for consideration in the Senate will let federal authorities stop unflagged vessels in international waters. It's an antiterrorism and antidrug issue that came to Washington's attention when handmade drug subs loaded with 12 tons of coke started showing up. From 2001 to 2007, 23 incidents involving the vessels occurred. This year, there have been 29, and the Coast Guard speculates that the vessels are responsible for moving 32 percent of all cocaine between Colombia and the United States.

Senator Lautenberg's press release on the proposed bill here. Senator Joe Biden has his own bill as set out here:

In recent years, drug trafficking organizations have started using Self-Propelled Semi-Submersible watercraft (SPSSs) to transport large amounts of cocaine from Colombia to Central America, Mexico, and ultimately the United States. SPSSs are similar to submarines in that they can operate with a significant portion of their hull below the waterline, which makes them hard to detect. When the vessel operators realize they have been spotted by law enforcement, they can open a valve and scuttle the SPSSs by quickly flooding the watercraft. As a result, the SPSSs and any drugs on board quickly sink to an unrecoverable depth. The 3 to 4 man crew then jumps overboard. Since no narcotics are recovered, they avoid prosecution and law enforcement can only rescue them and return them to land. 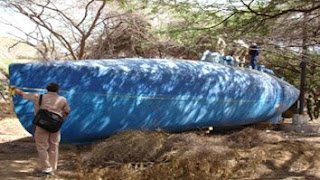 The "anti-drug war" crowd is, not surprisingly, scoffing at the proposals, as seen here:

This is the kind of legislation that makes drug lords cough up their caviar with laughter. They're building submarines in the f@#king jungle. They'll dig a tunnel from Bogota to Brooklyn if they have to and I really don’t understand why Joe Biden is even bothering to pretend they give a damn about anything he does. Give us a break, seriously.

It might be nice if the Congress would pony up with more dollars for the Coast Guard so they can fund new ships, aircraft (I wonder if blimps might be good for anti-SPSS patrols?) and other tools to fight this threat.
Posted by Mark Tempest at 8/18/2008 12:21:00 AM