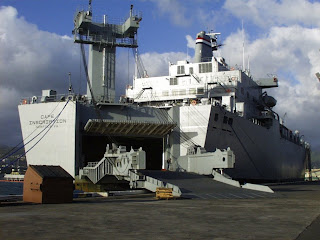 The U.S. Maritime Administration has struck a deal with the Transportation Command to provide ships for "humanitarian emergencies" - as set out in this MARAD
press release

The U.S. Department of Transportation’s Maritime Administration announced today that it has signed an agreement with the U.S. Department of Defense’s United States Transportation Command to use National Defense Reserve Fleet (RRF) ships, particularly DOT’s Ready Reserve Force, to support government response to civil emergencies at home, as well as for defense sealift and humanitarian response overseas.

The agreement, signed by Maritime Administrator Sean T. Connaughton and General Norton A. Schwartz, commander of U.S. Transportation Command, formalizes using the ships in ways that have been tested under emergency conditions. During the hurricane season of 2005, RRF ships in Beaumont, Texas, provided the template for one use of the ships: emergency vehicles were driven on board two RRF ships berthed in Beaumont, where they were sheltered from Hurricane Rita, and were thus ready to respond to local emergencies when the storm was over. Other RRF ships provided food and shelter for recovery workers and first responders on the Gulf Coast during Hurricane Katrina and its aftermath.

Since its inception in 1976, the primary purpose of the RRF is to provide the U.S. Transportation Command with strategic sealift support for combatant commanders. The 44 ships of the RRF are owned by the Maritime Administration, crewed by civilian merchant mariners, and managed by commercial U.S. companies. The new agreement details the procedures the agencies will use for civil contingencies and national disasters such as the safe storage of emergency vehicles, providing fuel for local emergency services, or berthing and feeding of first responders.

This idea is not a new one. It has previously been discussed here, here. Also worth visiting is Professor Whitehurst's site here, which features his papers on "Hurricane Relief from the Sea."
Posted by Mark Tempest at 8/19/2008 12:57:00 AM

Email ThisBlogThis!Share to TwitterShare to FacebookShare to Pinterest
Labels: Disaster Relief from the Sea, Marad