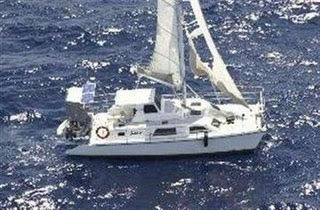 Remember the yacht found floating off Australia without a crew? See here for a reminder.

A coroner purports to have the answers:

Coroner Michael Barnes said evidence put before him during a four day inquest led him to conclude that "an unfortunate series of events," befell the trio, who were all relatively inexperienced sailors, only a few hours after they set sail.

Mark Tempest
The main focus of this blog is maritime security. Other matters may appear. I am a retired attorney and a retired Navy Reserve Captain (Surface Warfare). Opinions expressed herein are my own. Sometimes I have the experience to back them up. Your opinions may vary. Don't panic. Feel free to disagree, that's what free speech is all about. Nothing contained herein should be confused as me giving legal advice to anyone. If you are confused, welcome to the club. All mistakes herein are my fault. I have sufficient academic credentials to be dangerous to myself and to others. Comment moderation is at my discretion, so your comments may never appear. You can start your own blog for free and comment there all you want. I enjoy a healthy debate, but not arguing with trolls. If you can't comment without using intemperate language, go someplace else., Under the header: OS2 John Dengel, in USS Ross (DDG 71), prepares to throw a heaving line to line handlers on the pier during a scheduled port stop in Gdynia, Poland (U.S. Navy photo by MCSN Christine Montgomery)