Somali Pirates: Starting the Week with a Bang

As of Sunday, reports of Pirate Action Groups and attacks from here put on a map: 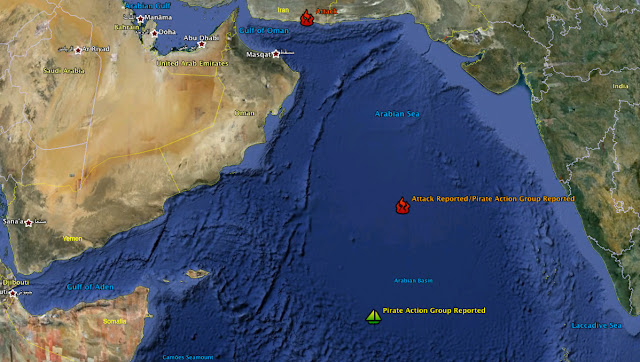 In case you missed it, the Indian Navy and Coast Guard sank a pirate mother ship and rescued some hostages as well as arresting several pirates. See here and here (reporting a 12 hour "battle" between the pirates and the Indian forces).


The Navy's sinking of a pirate 'mother vessel' off the Lakshadweep Islands will send a "strong message" to the sea brigands that India will not tolerate their nefarious designs anywhere near its waters, Navy chief Admiral Nirmal Verma told TOI on Sunday.

"There is no question of anybody messing in our waters or area... it's absolutely unacceptable to us," Admiral Verma said.

This comes after naval fast attack craft INS Cankarso sank Prantalay, a hijacked Thai trawler being used as a mother vessel by Somali pirates to carry out attacks for the last nine months, after a hot chase on Friday night. In the well-executed operation, the Navy apprehended 15 pirates as well as rescued 20 Thai and Myanmar nationals who had been taken hostage on board Prantalay. "The pirates are being interrogated... they are being brought to Mumbai for legal proceedings," Admiral Verma said.

In the meantime, an attack off the coast of Iran is the northernmost reported attack by Somali pirates to date (see here). New reports are that an Iranian frigate helped break up the attack. See Vesseltracker.com report:

It appears that the South African Navy may soon deploy one of its new ships to assist in fighting East African piracy -see here:


. . . [O]ne of the navy's new frigates, the SAS Mendi, headed for Durban a week ago in anticipation of the signing of an agreement aimed at protecting Mozambique against piracy.

UPDATE: The South Koreans did a perp walk with the 5 Somali pirates captured by ROK forces when they retook the Samho Jewelry (see here and here):

Malaysia, too, has its captured 7 pirates (see here for post on their capture) in custody as reported by the "BBC" in its article titled (and scare quoted) as


Seven Somali men accused of being pirates have arrived in Malaysia where they could face prosecution.
They were captured by the Malaysian navy 10 days ago as they allegedly tried to hijack a tanker in the Gulf of Aden.
Legal experts in Malaysia are now studying whether they can be charged.