UPDATE: Some people seem to have been expecting a 30 meter wall of water to be breaking against the hotels of Waikiki Beach. They should count their blessings that it didn't turn out that way.

Below is the reading from DART #51407 showing the increase in the water column as it neared Hawaii: 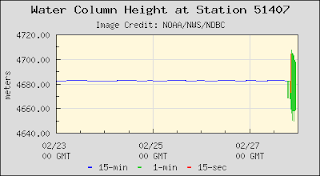 The blue arrow below points to that location: 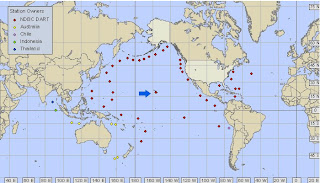 UPDATE: Don't be fooled by television coverage from Oahu - it's 200 miles from the big island of Hawaii to Oahu so the tsunami will take 1/2 or more to travel that distance  - and tsunamis slow as they near land shallower water.... 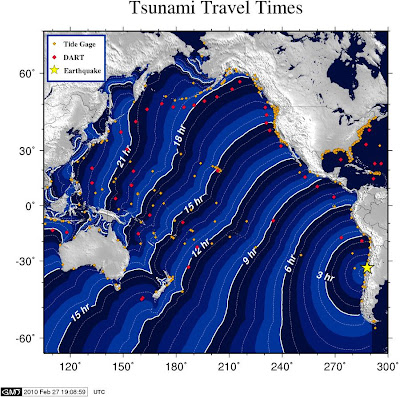 With the distressing news of a major earthquake in Chile, tsunami warnings have gone out across the Pacific Ocean - including Hawaii and California.

How do scientists predict and track any tsunami activity? They use an important tool - buoys mounted in the path of tsunamis as part of the Deep-ocean Assessment and Reporting of Tsunamis (DART®) system - as set out at the NOAA DART website and reproduced below:

To ensure early detection of tsunamis and to acquire data critical to real-time forecasts, NOAA has placed Deep-ocean Assessment and Reporting of Tsunami (DART®) stations at sites in regions with a history of generating destructive tsunamis. NOAA completed the original 6-buoy operational array ... in 2001 and expanded to a full network of 39 stations in March, 2008.

Originally developed by NOAA, as part of the U.S. National Tsunami Hazard Mitigation Program (NTHMP), the DART® Project was an effort to maintain and improve the capability for the early detection and real-time reporting of tsunamis in the open ocean. See DART® development for more info.

DART® presently constitutes a critical element of the NOAA Tsunami Program. The Tsunami Program is part of a cooperative effort to save lives and protect property through hazard assessment, warning guidance, mitigation, research capabilities, and international coordination. NOAA’s National Weather Service (NWS) is responsible for the overall execution of the Tsunami Program. This includes operation of the U.S. Tsunami Warning Centers (TWC) as well as leadership of the National Tsunami Hazard Mitigation Program. It also includes the acquisition, operations and maintenance of observation systems required in support of tsunami warning such as DART®, local seismic networks, coastal, and coastal flooding detectors. NWS also supports observations and data management through the National Data Buoy Center (NDBC).
System Overview

DART® systems consist of an anchored seafloor bottom pressure recorder (BPR) and a companion moored surface buoy for real-time communications (Gonzalez et al., 1998). An acoustic link transmits data from the BPR on the seafloor to the surface buoy.

The BPR collects temperature and pressure at 15-second intervals. The pressure values are corrected for temperature effects and the pressure converted to an estimated sea-surface height (height of the ocean surface above the seafloor) by using a constant 670 mm/psia. The system has two data reporting modes, standard and event. The system operates routinely in standard mode, in which four spot values (of the 15-s data) at 15-minute intervals of the estimated sea surface height are reported at scheduled transmission times. When the internal detection software (Mofjeld) identifies an event, the system ceases standard mode reporting and begins event mode transmissions. In event mode, 15-second values are transmitted during the initial few minutes, followed by 1-minute averages. Event mode messages also contain the time of the initial occurrence of the event. The system returns to standard transmission after 4 hours of 1-minute real-time transmissions if no further events are detected.

The first generation DART® (DART I) systems had one-way communications from the BPR to the Tsunami Warning Centers (TWC) and NDBC via the western Geostationary Operational Environmental Satellite (GOES West) (Milburn et al., 1996). DART I became operational in 2003. NDBC replaced all DART I systems with the second generation DART® systems (DART II) in early 2008. DART I transmits standard mode data once an hour (four estimated sea-level height observations at 15-minute intervals). For information about the development of DART® technology, click here.

DART II became operational in 2005 (Green, 2006). A significant capability of DART II is the two-way communications between the BPR and the TWCs/NDBC using the Iridium commercial satellite communications system (Meinig et al., 2005). The two-way communications allow the TWCs to set stations in event mode in anticipation of possible tsunamis or retrieve the high-resolution (15-s intervals) data in one-hour blocks for detailed analysis. DART II systems transmit standard mode data, containing twenty-four estimated sea-level height observations at 15-minute intervals, once very six hours. The two-way communications allow for real-time troubleshooting and diagnostics of the systems. The DART® buoys have two independent and redundant communications systems. NDBC distributes the data from both transmitters under separate transmitter identifiers. NDBC receives the data from the DART II systems, formats the data into bulletins grouped by ocean basin (see the NDBC - DART® GTS Bulletin Transmitter List, for a listing of the bulletin headers used for each transmitted identifier), and then delivers them to the National Weather Service Telecommunications Gateway (NWSTG) that then distributes the data in real-time to the TWCs via NWS communications and nationally and internationally via the Global Telecommunications System. 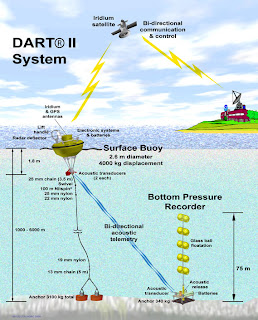 The map near the top of this post shows the location of DART buoys and other buoys placed by other countries in this international effort to detect and warn of tsunamis and comes from here.

More on DART and tsunamis here:


In the deep ocean, a tsunami is barely noticeable and will only cause a shallow and slow ripple on the sea surface as it passes. As it approaches the land, however, tsunamis become much more of a hazard. When a tsunami approaches shallower waters near the coast, the waves slow down and become compressed, causing them to grow in height. Under the best case scenario, the tsunami comes onshore like a quickly rising tide and only causes gentle flooding in low-lying coastal areas. Under the worst case scenario, however, walls of water more than 100 feet high rush ashore causing large scale destruction and flooding — a cycle which may repeat itself many times before the hazard finally passes.

Tsunamis typically cause the most severe damage and casualties near their source (i.e., earthquake) where the waves are the highest. Nearby local coastal populations — often disoriented from the violent earthquake shaking — may have very little time to react before a tsunami is generated and should move inland and to higher ground immediately.

Larger, more powerful tsunamis can cause destruction and casualties over a much wider area — even across the entire Pacific Basin. However, because they are generated by more distant earthquakes and will make landfall several hours (as opposed to minutes) after an earthquake, NOAA and its partners are able to warn the public about these large regional tsunamis several hours before they strike, thus allowing adequate time for evacuation.
***
The NOAA Weather Service operates two tsunami warning centers — the West Coast/Alaska Tsunami Warning Center in Palmer, Alaska, which has warning responsibility for Alaska, British Columbia, Washington, Oregon and California; and the Richard H. Hagemeyer Pacific Tsunami Warning Center in Ewa Beach, Hawaii, which conducts research and monitors tsunamis for Hawaii and both U.S. and international interests in the Pacific Basin. Both centers were established in 1967 and 1949, respectively, after damaging tsunamis hit those states. Together they are the operational centers of a vigilant 24-hour U.S. tsunami warning system for the Pacific Rim.

Both centers work closely with state emergency managers, the U.S. Geological Survey and the Federal Emergency Management Agency to mitigate potential tsunami hazards. The NOAA Tsunami Warning Centers continuously monitor data from seismological and tidal stations, evaluate earthquakes that have the potential to generate tsunamis and disseminate tsunami information and warning bulletins to government authorities and the public. Despite this, however, it was not until DART that NOAA was able to accurately detect, assess and forecast the threat tsunamis pose to coastal communities.

Map showing Deep Ocean Assessment and Reporting on Tsunami Buoys.Deep Ocean Assessment and Reporting on Tsunami
In 1997, the National Tsunami Hazard Mitigation Program provided funding for DART development. The DART project was developed by the NOAA PMEL and brought into operational use by the NOAA NDBC in October 2003. The DART project is an ongoing effort to maintain and improve the capability for the early detection and real-time reporting of tsunamis in the open ocean. DART also reduces costly false alarms — 75 percent of all warnings issued since 1948 have been for non-destructive tsunamis yet the evacuation of Honolulu in 1986 cost $40 million .

UPDATE: Some buoy data, first from a buoy off Chile and then from one closer to Hawaii: 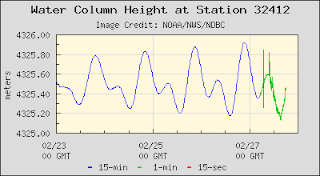 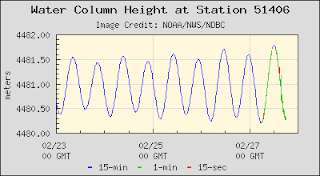