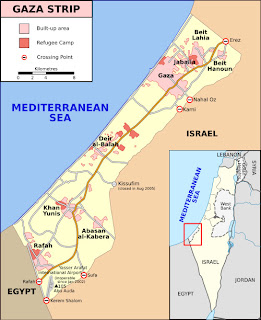 Palestinian militants said Tuesday they had launched a large number of floating explosives into the Mediterranean Sea to avenge the death of a top Hamas commander, a day after two bomb-laden barrels washed up on Israel's coastline.

Israeli authorities launched an intensive search for new bombs, closing miles of beaches, deploying robotic bomb squads and ordering surfers out of the wintry waters.
***
On Monday afternoon, a barrel bomb washed up on the beach of Ashkelon, about nine miles (15 kilometers) north of Gaza. A few hours later, another one was found at Ashdod, six miles (10 kilometers) farther north.

Each had about 22 pounds (10 kilograms ) of explosives, police said. They said bombs of that size could cripple small civilian vessels but not Israeli warships.

The barrels should not pose a threat to shipping lanes in the east Mediterranean since the tides would just carry them back to shore.

The second barrel blew up as a police robot was examining it, sending the tractor-like device tumbling through the air, according to witnesses. A police bomb squad defused the other one. No one was hurt.

Maritime authorities warned sailors and fishermen to be alert to possible dangers in the waters. In Ashdod, a crane-like robot crawled along the beach, prodding suspicious objects.

The military linked the barrels to two explosions at sea on Friday, aimed at Israeli ships. Israeli analysts speculated that the beach barrels might have been meant for ships but floated ashore instead.

Email ThisBlogThis!Share to TwitterShare to FacebookShare to Pinterest
Labels: Hamas, Israel, Mine Warfare