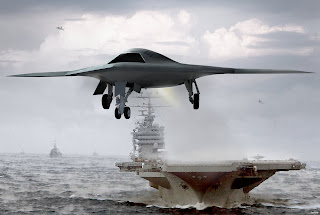 The first of two X-47Bs is scheduled to be delivered by Northrop early this year, with the second to follow late in 2010. Carrier-based tests are to begin next year.

Unlike other unmanned aerial vehicles, the X-47B - which looks like a miniature B-2 Stealth bomber - is intended as a strike aircraft that can operate from aircraft carrier flight decks.

X-aircraft are generally intended as technology demonstrators and not prototypes of operational aircraft, although both contenders for the Joint Strike Fighter (JSF) program came from the X line. The N-UCAS program has been envisioned as leading to an operational Navy aircraft in about a decade, but the QDR may have spurred an effort to accelerate that timeline.

"There is a lively debate over whether or not the N-UCAS demonstrator should result in a penetrating, ISR strike bird, or be more of a strike fighter," Navy Undersecretary Bob Work said during a Feb. 2 interview. "That debate has not quite been resolved. Having this extra $2 billion added to the budget is going to help us resolve that debate."

Northrup Grumman site on the X-47B UCAS here. And yet more here.

And in the "buzzword world," it's "transformational."

Email ThisBlogThis!Share to TwitterShare to FacebookShare to Pinterest
Labels: UAVs, US Navy