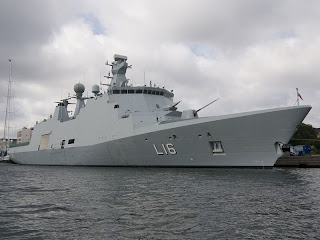 Danish special forces stormed a ship captured by armed Somali pirates Friday and freed the 25 crew on board, an EU naval spokesman said, marking the first time a warship has intervened during a hijacking.

After the vessel Ariella sent out a distress signal early Friday, the Danish warship Absalon sent a helicopter to confirm the presence of pirates, and communicated with the crew to ensure they were in a safe location, said Cmdr. John Harbour, spokesman for the European Union Naval Force.

Then Danish special forces aboard the Absalon approached the Ariella in inflatable dinghies. The forces scaled the side of the ship and freed the 25 crew, who had locked themselves in a secure room, Harbour said. The forces continued to search the vessel for the pirates.

Early on the morning of 5 Feb 2010, the M/V ARIELLA came under attack from Somali pirates who were able to get onboard and attempted to take control of the ship.

The ARIELLA was sailing in a “Group Transit” within the International Recognised Transit Corridor (IRTC) under the protection of Coalition navies. An alert went out, picked up from an Indian Warship TABAR who sent out a general message on the Mercury communication system. An EU NAVFOR French Maritime Patrol Aircraft (MPA) was quickly on the scene and confirmed a sighting of armed pirates on the deck of the ARIELLA. The MPA made contact with Battle Watch Officers from the NATO Danish Warship ABSALON from CTF 508.

The NATO ship ensured that the crew onboard were safe before the decision was made to send in the specialist teams. At the same time as NATO ship ABSALON boarded ARIELLA, sailors from the Russian Navy ship Neustrashimyy who was operating nearby, successfully boarded and detained a second pirate skiff. The ongoing co-operation between the maritime partners, the EU Naval Force (EUNAVFOR) and NATO Combined Maritime Force 151 (CMF 151), together with maritime nations, such as the Russian and Indian navies led to the successful release of M/V ARIELLA.

M/V ARIELLA is an Antigua and Barbuda Flagged vessel owned by Splosna Plovba, International Shipping and Chartering Ltd, Slovenia. She has a crew of 25 and the nationalities are 1 Bulgarian, 15 Filipino, 1 Slovakian, 1 Indian and 7 Ukrainian and they are all safe. The ship was registered with MSC HOA, was in contact with UKMTO and was part of a Group Transit when she was attacked.

EU NAVFOR strongly recommends that all vessels that transit through the high risk areas, namely Gulf of Aden, Somali Basin and Indian Ocean implement their ships security plan that follows all guidance and advice that is set out and contained in Best Management Practices (BMP). Reference should be made to MSC HOA website www.mschoa.org.

EUNAVFOR SOMALIA Operation ATALANTA main tasks are to escort merchant vessels carrying humanitarian aid of the ‘World Food Program’ (WFP), to protect vulnerable ships in the Gulf of Aden and Indian Ocean and to deter and disrupt piracy.

Ariella photo by William Davis at Shipspotting.com and used in accord with terms therein.
Posted by Mark Tempest at 2/05/2010 09:46:00 AM