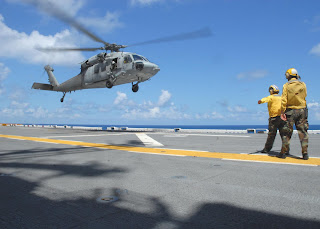 Good news out of what could have been a much worse situation:
Navy helicopter crashes in West Virginia:

Seventeen crew members and passengers aboard a Norfolk-based helicopter survived a crash and a night in the snowy wilderness of West Virginia.

The helicopter that crashed belongs to Squadron HSC-26, nicknamed "The Chargers". Captain Steve Schrieber is in charge of all the helicopters. He got word of the crash right after it happened yesterday afternoon. He also got word this morning that everyone on board was safe, the last of the injured leaving the scene just before noon.

"This is probably one of those survival stories that you are going to want to read about and make movies about because there was some incredible team work among the crew to stay alive under tough conditions," said Capt. Schrieber.

Captain Schrieber says the 17 had to spend the night on the mountain, they had survival suits, were dropped food by rescuers, but should feel lucky to be alive today.