War in the Future: Satellite Alternatives and More 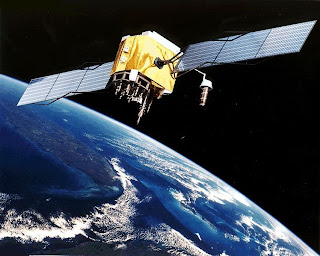 Very interesting discussion here about some alternatives to GPS satellites upon which the U.S. military (and, in point of fact, a whole lot of other folks, including merchant shipping and others) has grown very dependent:

The air force believes China is developing the ability to carry out a major attack on American military satellites. Their proposed solution is to take GPS out of orbit, and make it portable. High flying aircraft, UAVs or blimps would take over satellite communications, surveillance and navigation (GPS) chores, although for smaller areas. This would make GPS, and other satellite functions, more resilient to attack.

This is part of a trend in which military satellites are getting priced out of the market by cheaper manned aircraft and UAV alternatives. Even small, quickly launched micro-satellites, cost ten times more, per hour over the battlefield, than do alternatives. These now include things like weather balloons carrying satellite grade communications or sensors.

See also here and here. From the latter:

In the face of threats from jamming and attacks on satellites the United States must lessen its dependence on the Global Positioning System when faced with denied environments and develop alternatives to GPS, the top Air Force general said today.

A paper "Balloons in Today’s Military?" (circa 2005) from the Air War College Air & Space Power Journal is sort of on the topic- it involves the "near-space"- can be found here: 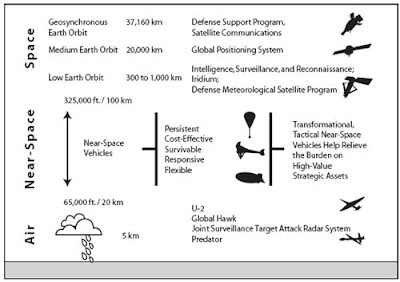 Many functions that are currently done with satellites could be performed, for tactical and operational commanders, using near-space assets more cheaply and with greater operational utility. To fully understand this fact, one must be able to grasp what the word “space” means to the war fighter. Sadly, too many people define space as a place where we operate satellites. That mind-set is, in a word, counterproductive. Space is not just a place and is not based on a specific platform type. To the warrior, space is a medium from which war fighters get effects—the proverbial “ultimate high ground.” If it has no direct effect on the battlefield, a war fighter has little use for it, especially in a time of crisis. Typically, space effects are strongly related to C4ISR. Until recently a large fraction of our C4ISR effects has been delivered from satellite platforms. The reason for operating in such a manner was that, in general, no other way existed to obtain similar effects. The extreme costs of space were easily justified due to the monopoly on the ability to provide the needed effects. However, with the advent of near-space concepts, the same effects can be obtained in a different way, especially for operational and tactical users. It is the individual effect that is paramount for the war fighter, not the platform or the environment where the platform resides. The primacy of the concept of space as a set of related effects, rather than a location or a set of platforms, is a true paradigm shift—and one long overdue.(illustration is from the article)

At least one system is being tested Combat SkySat. See here for a report on a 2008 Marine test launched off a Navy ship using the services of an Arizona Air National Guard unit:

The most modern communication balloon platform available, the Combat SkySat is larger than a weather balloon, and has the potential to provide communications between ship and helicopter, ship to shore, and between those on shore.

"There are some places between leaving ships and during insertions or raids where communication can be problematic," said Arizona Air National Guard Master Sgt. Kris Errett.

"Attached to the SkySat balloon is a communications payload containing global positioning systems, radios, and a hanging antenna. There are separate radios, one to control the payload and another, a communications repeater, for personnel to communicate with each other."

Boxer is the first ship in the fleet to have the new communication balloon platform aboard. It has been developed over the past three years, and this is the first operational underway test to determine future utility for embarked Marine Expeditionary Units (MEU). 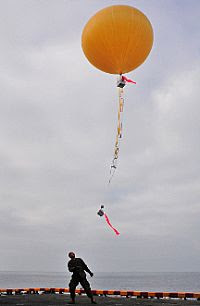 With a suspended ballast system, the latex balloon can be controlled to maintain an altitude between 60,000 – 85,000 feet above sea level. On its way up, the instrument cluster gathers information on wind direction and speed.

"Helium or hydrogen can be used to enable the balloon to fly" said Tech. Sgt. Craig Armstrong, Arizona Air National Guard. "We use helium due to its stability and accessibility."

In the base of the balloon is a venting system to release gas in order to reach a lower altitude. Hanging below the antennae is a five-pound box of sand, and by releasing sand the balloon climbs to a higher altitude.

"Once we're done with the mission we release the payload from the balloon," said Errett. "The payload has a parachute attached that opens after being released from the balloon. The balloon then climbs up to 120,000 feet, freezes, and bursts into many tiny pieces"

The Boxer Expeditionary Strike Group (BOXESG) is currently underway in support of the 13th Marine Expeditionary Unit's Certification Exercise to prepare for an upcoming deployment.

While there are many other systems, something like the Combat Sky system would seem to be ideal for localized disaster relief operations, too.

More on some "near-space" ideas here:

See here and here for info on a system designed for sea launching.And another Air War College paper here (pdf) on use of "Near Space Vehicles" (NSV) for persistent intelligence, surveillance and reconnaissance (ISR) at the battlefield level.

All this point to an area to keep a tactical eye on.

UPDATE: With a Navy SEAL angle: Pentagon knows it wants an intel blimp, but not how to get it :

The aircraft could loiter above forward operating bases or safeguard friendly forces on the move; it could monitor suspected weapon caches, track people slipping through mountain passes and watch for improvised explosive devices, which have been responsible for an estimated 80 percent of coalition casualties in 2009.
The U.S. has fielded winged, wide-area surveillance aircraft to try to untangle bomb-planting networks through forensic analysis, but hybrid backers said an airship could do the job more effectively because of its persistence. A persistent-stare-type craft allows analysts to “rewind the tape” after a bombing and “see who planted it and where it came from, and so on and so forth,” said Alan Ram, vice president of Guardian Flight Systems, formerly Blackwater Airships.

That Lockheed ship may be a model for the future, but it still reminds of that horrible creature from Ghostbusters: