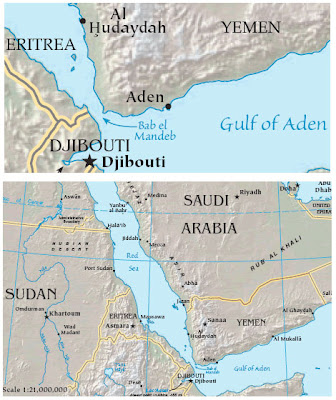 By closing the Bab al-Mandab, al-Qaeda could keep tankers from the Persian Gulf from reaching the Suez Canal or Sumed Pipeline, while also blocking southern oil transits such as China's transport from Port Sudan—a lifeline for that country's rapidly increasing appetite for energy.

Al-Quds acknowledges that al-Qaeda's control of the Bab al-Mandab "might not be easy, especially as it does not possess heavy weapons and modern boats that can be used for this purpose." The paper said, "But this does not mean it does not possess the logistical capabilities that can disrupt navigation in this vital international passageway," suggesting a widening of the war on terror.
***
In particular, it mentions the Somali pirates, thought by some to have a direct connection with the Mujahidin Youth Movement, who have hijacked more than 100 ships—some of them giant oil tankers.

"They must surely have gained considerable expertise in how to intercept commercial ships in the past 5 years—during which their activity intensified," the paper states.

A good lesson in energy chokepoints here, from which I have often quoted:

The Strait of Bab el-Mandab is a chokepoint between the horn of Africa and the Middle East, and a strategic link between the Mediterranean Sea and Indian Ocean. It is located between Yemen, Djibouti, and Eritrea, and connects the Red Sea with the Gulf of Aden and the Arabian Sea. Exports from the Persian Gulf must pass through Bab el-Mandab before entering the Suez Canal. In 2006, an estimated 3.3 million bbl/d flowed through this waterway toward Europe, the United States, and Asia. The majority of traffic, around 2.1 million bbl/d, flows northbound through the Bab el-Mandab to the Suez/Sumed complex.

Bab el-Mandab is 18 miles wide at its narrowest point, making tanker traffic difficult and limited to two 2-mile-wide channels for inbound and outbound shipments. Closure of the Strait could keep tankers from the Persian Gulf from reaching the Suez Canal or Sumed Pipeline, diverting them around the southern tip of Africa. This would effectively engage spare tanker capacity, and add to transit time and cost.

The Strait of Bab el-Mandab could be bypassed through the East-West oil pipeline, which crosses Saudi Arabia with a 4.8 million bbl/d capacity. However, southbound oil traffic would still be blocked. In addition, closure of the Bab el-Mandab would block non-oil shipping from using the Suez Canal, except for limited trade within the Red Sea region.

Security remains a concern of foreign firms doing business in the region, after a French tanker was attacked off the coast of Yemen by terrorists in October 2002.

Al Qaeda is a lot like rust. And it only takes the threat of a sea mine to cause concerns.

On the other hand, I seriously question the ability of al Aqaeda to do much more that cause a nuisance at sea - and a nuisance that can be overcome with proper sailing safeguards.
Posted by Mark Tempest at 2/15/2010 12:15:00 PM