One of the Burdens of Being Born in New Mexico 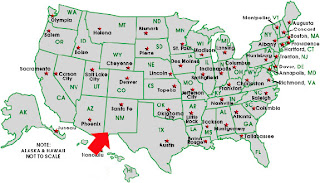 Every now and then it comes to someone's attention that I was born in New Mexico.

Given the geographic ignorance of many of my fellow citizens of the United States, this has, on occasion, led to some interesting conversations.

Such as being asked how long I have lived in the U.S. or compliments on my excellent English.

At least I am not alone. For over 20 years, New Mexico Magazine has been gathering evidence that there are far too many residents of the 49 other states that who have no business entering any geography bees.

Reports are gathered in a popular column titled "One of Our 50 is Missing". Here are a couple of examples:

LICENSE TO LAUGH: Recently, when Amber Vasquez, of Taos, moved to New York City, one of her first matters of business was to obtain a New York State driver’s license.
“I was in line at the MVD, and the clerk called me to the desk, and I explained that I wanted to exchange my New Mexico driver’s license for a New York license,” Vasquez says. “She informed me that I would have to take a driving and written test.”

This set off an alarm for Vasquez, who explained that it was her understanding that she could trade one state license for another if the first was still valid. The clerk then said, “You are correct, but the license has to come from another state.”

When she realized what was happening, Vasquez retrieved her New Mexico license and pointed to the area that read: “The State of New Mexico,” further explaining that “we are the state between Arizona and Texas.” The clerk was unfazed.

“I asked to speak with a supervisor, who repeated that I had to be from the United States in order to exchange my driver’s license,” Vasquez says. “By this time, I had a whole crowd of MVD employees passing my license around. Finally, one of them said, ‘Oh, this happened to me once! I think New Mexico is a state!’”

OUT FOR BLOOD: Karen Siemsen, of Martinez, California, received a bloodcurdling response when exchanging phone calls with a West Coast blood bank.

Siemsen, who splits her time between California and New Mexico, says she received a call from an American Red Cross Blood Bank in California asking for a donation.

“I responded that I was in New Mexico at the time and wouldn’t be able to make an appointment,” says Siemsen, “and I was told I was on a hold list for a year.”

When Siemsen asked why she was put on hold for so long, the blood-bank rep said, “Because you’re in Mexico.”

“I called to order an engagement calendar, and the woman on the phone was very nice,” says Hoffman, who has lived in Albuquerque for 56 years. “We chatted about weather and the season, then I began giving her information: credit card, address, zip, and state.”

But the museum representative’s first response was a head turner: “And what country is that?”

Hoffman was dumbfounded. “The USA.”

“Yes, really!” And Hoffman, thoroughly annoyed, hung up. She never received her calendar. “Maybe it was the foreign postage
that created the problem.”
***

THE PRICE IS WRONG: Jack Schweitzer, a partner in an Atlanta manufacturing firm who lives full-time in Eagle Nest, says a business relationship with AT&T recently took a quirky turn. According to Schweitzer, AT&T seems to think that New Mexico has seceded from the United States.

“My business partner in Atlanta placed a frantic call to me and wondered where I had been traveling, since my phone bill reflected $1,676.17 in international calls for the month,” Schweitzer says. When he reviewed the invoice, it became apparent that the calls placed between Atlanta and Eagle Nest had been billed at international rates. “I placed a call to AT&T, and after I had convinced them to look at a map of the United States—ultimately having to refer to New Mexico as one of those square states in the lower left-hand corner of the map—they saw the light.”

Schweitzer says he was relieved when AT&T gave him proper credit for the calls.

TRIPPIN’ OUT: When they arrived at New Jersey’s Newark Liberty International Airport, Rita S. Koeser and her husband were plenty excited about their first trip to Santa Fe. She rifled through her purse in search of the tickets, then presented them to the United Airlines attendant.

As if taking a cue from someone to spoil the Koesers’ mood, the attendant asked, “Can I see your passports?” Rita, who lives in Princeton, New Jersey, says she informed the attendant that she didn’t need a passport to travel to New Mexico because it is one of the 50 states.

But again the attendant asked for their passports. Now a bit miffed, Rita pulled out a small map she always carries, and pointed out New Mexico. The embarrassed attendant immediately apologized and processed their boarding passes.

“You would think an airline would make sure its attendants have some idea of geography, especially of the states in the U.S.A.,” Rita says.

In case you are one of the challenged, that's a map of the United States up there with a red arrow pointing to the State of New Mexico, which entered the Union in 1912.

Next, a lesson on the differences between the states of North Carolina and South Carolina.