Hat tip to Lee for pointing out a new legal avenue being tried by Clipper Project Ship Management A/S against Somali pirates in the capture of CEC Future as set out in Clipper brings blackmail charges against pirates: 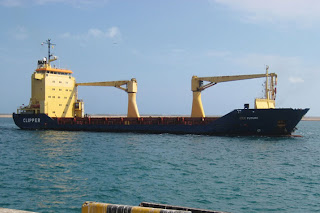 Clipper says it is now taking an active role by adding a new element to its anti-piracy effort.

Although the vessel has a different flag and management, Clipper has now found a way to bring charges forward.

It is acting through the Special International Crimes Office in Denmark which holds national responsibility for legal proceedings concerning serious international crimes.

The principle behind the charge is a paragraph within the Danish Criminal Code which states that the Code can be enforced when the criminal act is effectively taken against a Danish company: in this case Clipper Project Ship Management A/S, based in Copenhagen.

As noted in the article Clipper faces more than a few obstacles in pursuing this matter.