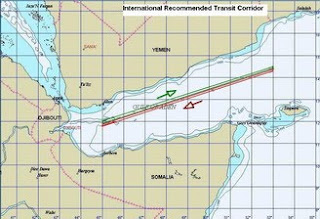 Somali pirates appear to have grabbed a North Korean ship, as set out here:

THE US Navy has reported that North Korea-flagged general cargo ship Rim has been hijacked by pirates, EU NAVFOR said today.

The 4,800dwt vessel was taken in the Gulf of Aden to the north of the Internationally Recommended Transit Corridor. It was not registered with MSC HOA.

EU NAVFOR said the US destroyer Porter and a helicopter from the destroyer Farragut, both in the service of NATO CTF 151, had confirmed the hijacking.

Rim is now heading towards the Somali Basin. Andrew Mwangura told Fairplay that 17 crew members were reportedly on Rim.

Several reports have noted that ships that are not participants in the MSC HOA approach are among those most often captured by pirates. See here:

And some of the ships plying those routes are getting more and more complacent. Carl Salicath, chair of the UN Group on Piracy, told the BBC on 28th January that as many as 25 per cent of the vessels using the area are ignoring the UN guidelines, which are designed so that even if the pirates become technically more sophisticated, the pirates won’t manage to hi-jack. The advice given states the rather obvious: sail as fast as possible; stay in contact with international maritime forces; sail only at recommended times; and use barbed wire where pirates could board.

For guidance on merchant ship self defense, see here for a NATO/EU video on the topic.

UPDATE: Got an email suggesting that the directional arrows on the above map should be reversed. That serves to remind me that I should include a cautionary note when posting maps - "Don't ever use maps found on this site for navigational purposes!"
Posted by Mark Tempest at 2/03/2010 12:21:00 PM