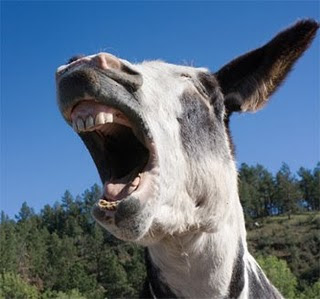 Hot on the news of the arrest of nut job with a pure case of exaggeration of heroic achievement (see Stolen Valor) comes this legal idiocy -
Stolen Valor Act facing legal challenges:

Now that's my First Amendment protected view of you, professor.

UPDATE: More on the two cases mentioned here. One was the case of a California Water Board member who


"had just been elected to a water district board in 2007 when he said at a public meeting that he was a retired Marine who received the Medal of Honor, the nation's highest military decoration.

His claim aroused suspicion, and he was indicted 2007. Alvarez, who apparently never served in the military, pleaded guilty on condition that he be allowed to appeal on the First Amendment question. He was sentenced to more than 400 hours of community service at a veterans hospital and fined $5,000. The case is now before a federal appeals court."


The other person challenging the law is Rick Glen Strandlof, who claimed he was an ex-Marine wounded in Iraq and received the Purple Heart and Silver Star. He founded an organization in Colorado Springs that helped homeless veterans.

Military officials said they had no record that he ever served. He has pleaded not guilty, and a judge is considering whether to throw out the charge.

That not quite the whole story on Strandlof, according to this:


Rick Strandlof, executive director of the Colorado Veterans Alliance and the man most colleagues knew as Rick Duncan, was front and center during the 2008 political campaigns in Colorado.

He spoke at a Barack Obama veterans rally in front of the Capitol in July, co-hosted several events with then- congressional candidate Jared Polis and attacked Republican Senate candidate Bob Schaffer in a TV ad paid for by the national group Votevets.org.

And the mostly Democratic candidates he supported — looking for credibility on veterans issues and the war — lapped it up appreciatively.

Now, politicians are dealing with news that the man they believed to be a former Marine and war veteran wounded in Iraq by a roadside bomb, in fact, never served in the military — but did spend time in a mental hospital.

Many of the candidates he supported won their elections handily and now say they were defrauded as much as anyone else.
***
In Udall's case, Strandlof appeared in an ad paid for by an independent political group that was legally barred from communicating or coordinating with the Democrat's campaign. (Jon Soltz, head of Votevets.org, said in a statement that his group usually checks the credentials of veterans used in ads but didn't in this case "because he was already a well-established leader of a veterans group in Colorado.")


The well-told combat tale, delivered by an accomplished liar, has become almost cliche. It has been known to yield any number of perks: a job, a date, a fundraising boost, a political leg up — even a free parking place via Purple Heart license plates. It can conceal character defects or even criminal histories.

Yeah, you know, some things real veterans might not get because they are honest.

UPDATE3 (9 Feb): More here, with a link to a real legal scholar here. Excerpts from Professor Volokh's amicus brief in the Strandlof case:

UPDATE4: From the government's brief in the Alvarez case:


Defendant’s challenge boils down to the startling proposition that the First Amendment protects a politician who lies to the public about his military record. As defendant puts it, “[f]alse speech is protected speech” and “[t]he Court’s
scrutiny [here] . . . should be especially demanding . . . where the statement was made by an elected official . . . on an issue of public concern: his qualifications for office.” As discussed below, defendant’s argument, if accepted, would turn the First Amendment on its head and also contradicts applicable law.

While no one can deny that the warning caveat emptor applies to politicians, the First Amendment does not, cannot, and should not shield a politician who tries to subvert the very democratic process that the amendment seeks to protect. In truth, settled First Amendment jurisprudence provides that deliberate falsehoods
fall outside the amendment’s protective shield. It is only in the realm of ideas –– unlike the case here which involves a readily verifiable misstatement of fact –– that falsehoods garner any free speech protection.

Moreover, even if the Court were to conclude that defendant’s lie deserves a modicum of protection, the government’s undeniable interest in protecting from dilution the significance of the nation’s highest military distinction and the
magnitude of the accomplishment of those who actually earned it clearly outweighs that interest.