Many of the military blogger community have been pursuing a man believed to be a military faker (see here, for example) - a man wearing a uniform of the United States Army, apparently in the rank of Brigadier General with enough military awards for valor that it is doubtful that such a hero would not be known in military circles. There was a lot of background checking and calls to the FBI for enforcement of the "Stolen Valor Act." The SVA is a federal law designed to put a stop to phonies (and there are a surprising number of them) assuming military honors they don't deserve.

Now it appears that their effort has paid off:


From KTRK Houston: Houston man arrested by the FBI for stolen valor:

He looks like a soldier. He says he's a soldier. But he's not a soldier. And now he is facing charges for lying about his resume. When we started asking questions, so did the FBI.

The man, who the FBI says is nothing but a fraud, even showed up in a military uniform at Houston Mayor Annise Parker's inauguration. The problem is that he didn't earn any of the medals he was wearing.

Michael Patrick McManus was arrested Friday night after a federal judge signed a warrant for his arrest. The FBI says he was arrested without incident. 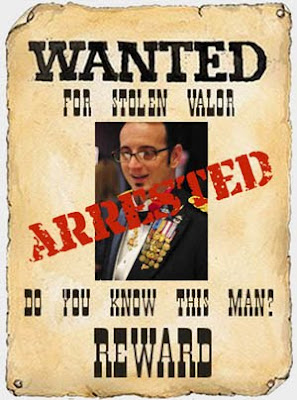