A defense of the Arizona immigration law by the law professor 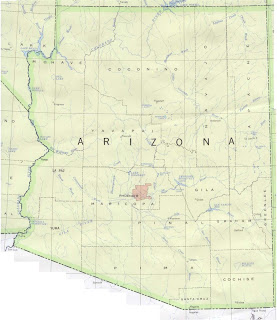 who helped draft the law:


SB 1070 — that prohibits the harboring of illegal aliens and makes it a state crime for an alien to commit certain federal immigration crimes. It also requires police officers who, in the course of a traffic stop or other law-enforcement action, come to a “reasonable suspicion” that a person is an illegal alien verify the person’s immigration status with the federal government.

Predictably, groups that favor relaxed enforcement of immigration laws, including the American Civil Liberties Union and the Mexican American Legal Defense and Education Fund, insist the law is unconstitutional. Less predictably, President Obama declared it “misguided” and said the Justice Department would take a look.

Presumably, the government lawyers who do so will actually read the law, something its critics don’t seem to have done. 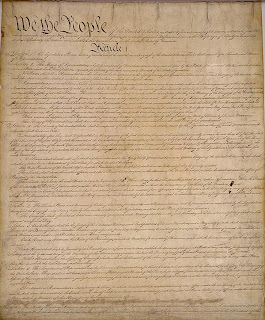 Once again, Mr. Obama seems fuzzy on the law and whether or not a state has the right to act in the absence of federal action.

I'm beginning to wonder what sort of "Constitutional law professor" Mr. Obama was.

After a couple of these hip shot judgments of his, I think it might be he was of the "shoot, shoot, aim" school. He sure is judgmental about some things about which he has limited knowledge.

Of course, if you think it's a "living constitution" perhaps you don't have to worry about what it actually says. But then again, if it's a living document, perhaps the time has come to interpret it in light of the harm illegal immigration is doing to this country... 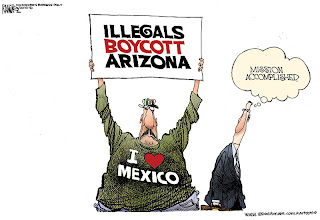 UPDATE: Another defense (and much more) here:


So when the president hastily pronounced Arizona’s new immigration bill “misguided” and “irresponsible,” Arizona residents — whom the federal government has abandoned to the siege of Mexican warlords, narco-peddlers, and squatters — may be forgiven for snickering. Come to think of it, snickering has become the default reaction to pronouncements on the law by our ex-law-prof-in-chief , particularly those prefaced by his most grating verbal tic, “Let me be clear . . . .”

Why “misguided” and “irresponsible”? The president elaborated that the Arizona law “threaten[s] to undermine basic notions of fairness that we cherish as Americans.” To be sure,  Obama has notions of fairness, but they are his own, marinated in doctrinaire leftism. As for the American ideal that he ceaselessly invokes but clearly doesn’t get, our Constitution’s framers thought fundamental fairness would be fatally undermined by two things: the inability of the governed to consent to legal arrangements because it had become impossible to know what the law is, and the failure of central government to tend to its first responsibility: the nation’s security.
***
Our elected officials and judicial officers don’t rule us. They are there to govern, to implement our will. When they resort to impenetrable legislative monstrosities to implement their own will without our consent — indeed, over our objection — that is not governing. It is dictating.
Maybe that’s the Obama administration’s problem with Arizona’s new law: It is too short (16 pages), too clear, and too reflective of the popular will. Unlike the social scientists in Nancy Pelosi’s federal laboratory, state lawmakers didn’t need to pass the law first in order to find out what was in it. Essentially, it criminalizes (as a state misdemeanor) something that is already illegal (namely, being present in the United States in violation of federal law), and it directs law-enforcement officers to, yes, enforce the law. Democrats and their media echo-chamber regard this as radical; for most of us, it is what’s known as common sense.
And here’s another commonsense proposition: A government that abdicates our national defense against outside forces is no longer a government worth having.
***
Arizona is a sovereign state. Its citizens have a natural right to defend themselves, particularly when the federal government surrenders. The state’s new law does precisely that, in a measured way that comes nowhere close to invoking the necessary, draconian powers Leviathan has but refuses to use.