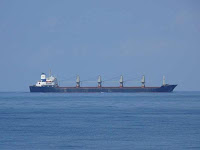 The YASIN C, with deadweight of 36 318 tonnes, left the IRTC almost one week ago and was heading to Mombasa. The Turkish owned and operated YASIN C has a crew of 25 and all are believed to be Turkish. It is understood that first reports of the attack on the ship came from the NATO Turkish warship GELIBOLU that received distress calls from the YASIN C. EU NAVFOR, who works closely with NATO and CMF, continues to monitor the situation.

Photo from Shipspotting.com by Vladimir Knyaz and used in accord with the terms of that site.
Posted by Mark Tempest at 4/07/2010 09:51:00 PM