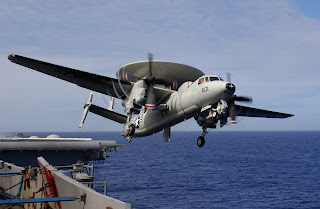 
The E-2C Hawkeye, returning from a mission in Afghanistan, was a few miles out from the Dwight D. Eisenhower aircraft carrier. Zilberman, 31, was a veteran U.S. Navy pilot who had flown many times in the Middle East with the Hawkeye, a turbo-prop aircraft loaded with radar equipment.

The starboard propeller shut down, causing the plane to become unstable and plunge. Zilberman ordered his three crew mates, including the co-pilot, to bail. He manually held the plane as steady as possible so they could jump.

"He held the plane level for them to do so, despite nearly uncontrollable forces. His three crewmen are alive today because of his actions," Navy Rear Adm. Philip S. Davidson wrote to Zilberman's parents.

Zilberman went down with the aircraft on March 31. The 1997 graduate of Bexley High School was declared dead three days later, his body lost at sea.

Donations for the education of his children can be made here.

Where do we get such men?