1. INDIAN OCEAN: French navy captures six men after pirate attack, 19 Apr 10. French forces captured six suspected pirates in the Indian Ocean after a command and supply ship was attacked by gunmen in speedboats, the French military said on Wednesday. Pirates in two skiffs attacked the (SOMME) overnight on Monday, some 300-km (190 miles) off the coast of Somalia. The French fired back and the speedboats fled. No one was injured and after a brief search of the area, the Somme discovered the assailants' mother ship. "We found the suspected
pirates, petrol and equipment that could be used for anything but fishing," said Colonel Patrick Steiger, a spokesman for the military. It was the second time in six months that the "Somme" had come under attack while taking part in a European anti-piracy operation in the area (Reuters).
.
2. INDIAN OCEAN: Turkish navy commandos capture pirates, 18 Apr 10. Turkey's
military says navy commandos aboard a frigate captured 13 pirates in the Indian Ocean. The military says the commandos aboard Turkey's (TCG GELIBOLU) stopped the pirate vessel on Sunday as it sailed off the Seychelles on a route being used by a Turkish freighter heading to Mombassa, Kenya. The commandos captured the pirates, destroyed their two skiffs and confiscated other pirate material. The military says the pirates were photographed throwing weapons and ammunition overboard, but didn't say how close the pirates were to the freighter. The military did not say where the captured pirates would be taken (AP).
.
3. INDIAN OCEAN: US Navy ship captures pirates in Gulf of Oman, 5 Apr 10. The Navy guided-missile destroyer MCFAUL captured 10 pirates after an attack on a ship near Salalah, Oman. The pirates pulled alongside the motor vessel RISING SUN on Tuesday and were firing small arms and rocket-propelled grenades, prompting the crew to send out a distress call, according to a news release from the U.S. Navy. The RISING SUN’s crew increased its speed and used evasive maneuvers such as spraying the attackers with fire hoses, the release says. The maneuvers worked and the pirates broke off their attack and returned to their mother ship, an Indian cargo dhow under their control. The Oman Navy warship AL SHARQUIYAH arrived
first on the scene, and as it approached the dhow, nine sailors who were being held hostage jumped into the water, the release says. One of the sailors drowned, but the others were taken aboard the Omani Navy ship. The MCFAUL arrived as the Omani crew was helping the sailors who escaped. The MCFAUL’s crew directed the pirates to surrender by putting their hands in the air and gathering on the bow of the seized dhow. As they complied, they could be seen throwing weapons overboard. Two boarding teams from the MCFAUL took control of the dhow and detained the pirates, who were transferred to the U.S. destroyer CARNEY, where they will be
held until they can be transferred for prosecution, the release says. The surviving sailors who escaped their captors aboard the dhow were returned to the vessel, according to the U.S. Navy (LM: Virginian-Pilot).
.
4. INDIAN OCEAN: Dutch sidestep EU red tape to rescue German ship, 5 Apr 10. Gaining fast on the pirates who had seized a German freighter, Dutch naval captain Col. Hans Lodder had no time to waste on bureaucracy. Sidestepping the command of the European Union's anti-piracy task force, he went instead to his own government for authorization to recapture the ship by force. Lodder first ascertained that the freighter's crew had locked themselves in a bulletproof room. Then he launched his ship's Lynx helicopter with a team of six special forces marines. With troops providing cover fire from the helicopter, the marines rappelled onto the ship's deck of the MV TAIPAN to shoot it out, if need be, with the pirates. But they met no resistance. The 15-man crew was rescued, and 10 Somali pirates were captured. "The pirates surrendered the moment they saw the marines," Lodder said in a telephone interview Tuesday from the Dutch frigate TROMP. No one was injured. Monday's successful rescue showed that, when swift decisions are needed, it can be quicker to work around the European Union's command. It was the first time a Dutch ship involved in the EU mission had used force to recapture a hijacked ship. An EU spokesman could not immediately recall any incident when troops under EU
command had boarded a seized ship under the threat of fire. Lodder said he decided to seek permission from his own command for an "opposed boarding" — one where pirates may resist — rather than act under procedures laid down by Brussels. "We just told my force commander we would operate under national command until after the boarding," Lodder told The Associated Press. "We kept everyone in the EU informed of everything we did." A spokesman for the EU mission acknowledged the Dutch action avoided a delay and was legitimate. "For speed of reaction, if you're on the spot ... (and) dispatched at haste to react to something immediately, the best thing to do is to go under national command," said Cmdr. John Harbour, U.K.-based spokesman for the European Union Naval Force Somalia. "If we were about to conduct an operation with a bit more time on our hands then we may well have gone through the standard EU process with a view to consulting," he added. "That consultation just takes a bit longer." The TROMP may turn over the 10 captured Somalis on Monday to German or Dutch prosecutors for what would be a rare European piracy trial (AP). 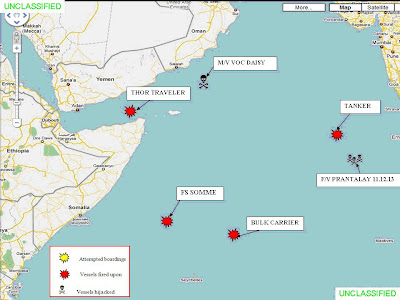 More on the missing tug boat PU2007 available at the ReCAAP site here (pdf) from which the following picture are liberated: 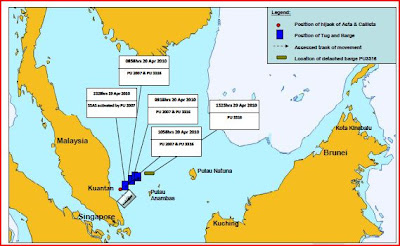 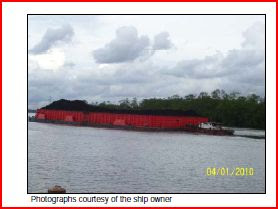