Drilling Rig Blows Up in Gulf of Mexico -11 still missing 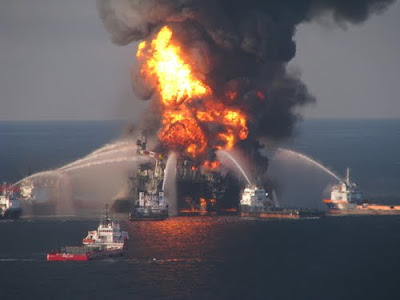 
Transocean Corp. said 11 people are still missing from a drilling rig that experienced an explosion and fire late Tuesday night about 40 miles off the Louisiana coast in the Gulf of Mexico.

In a news conference today, officials said they still do not know for sure the cause of the accident, but it appears to have been a blowout, where hydrocarbons travel up the subsea piping to the rig in an uncontrolled manner.

Adrian Rose, Vice President of Quality, Health, Safety and Environment for Transocean, said the rig had stopped drilling and was in the process of getting the 18,000-foot-deep well ready for production. It appears hydrocarbons were able to travel up the drilling riser — a pipe that carries mud and other drilling fluids back to the rig on the surface — and ignite.

“So this was a blowout?” asked a reporter.

“Basically, yes,” said Rose. “But we still don't have all the facts and this is just an assumption we're making.”

Firefighters continued to battle the oil-fueled blaze aboard the Deepwater Horizon this afternoon. The fire has ebbed and flowed throughout the day on the rig, which appears to be listing at about a 10 degree angle, Rose said.

Of the 126 workers onboard, 17 were injured and flown by helicopter to onshore hospitals. Seven were considered critical. One is in a burn unit at The University of South Alabama Medical Center in Mobile while nine have been released from that facility and others. The location of the remaining seven is unclear.