First, the French - as reported at MSC(HOA) here: 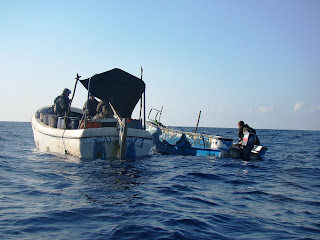 EUNAVFOR French warship FS NIVÔSE was vectored onto these craft and intercepted the suspected pirate vessels. NIVÔSE launched its helicopter and additionally sent a boarding party which subsequently apprehended 7 suspect pirates and found small arms, an RPG and ladders. This is the fourth such successful interception by NIVÔSE since joining the EU NAVFOR operation. 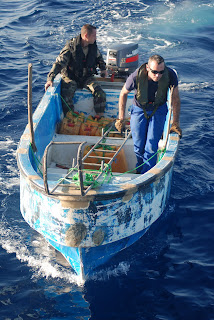 See also here, where the pictures of the French investigating the "mother ship" (note all the fuel drums) and a suspected pirate skiff (looks the the shop that prepares boarding ladders does a nice job) came from. Clicking on the pictures makes them bigger.

Now, the Iranians, with a report from Iranian PressTV here:


Iran's Navy has rescued an Iranian oil tanker attacked by Somali pirates in the dangerous waters of Gulf of Aden.

According to Iran's Mehr News Agency, the Iran Faraz oil tanker was sailing from the southern Iranian port city of Bushehr to Izmir in Turkey when it came under attack by four pirate boats.

Pirates fled when Iran's Navy ships in the area started to chase the boats, Mehr said.

Iran Faraz continued its journey towards Izmir after the incident, the report added.

The photograph accompanying the PressTV article is from an earlier (March 5, 2010) pirate investigation by the French vessel Nivose, which was on a suspected pirate nabbing roll at the time:

From 5 to 7 March 2010, joining mission forces from France, Italy, Luxembourg, Spain and Sweden, Nivôse secured its "biggest seizure" so far in the vital shipping lane, with 35 pirates arrested and four mother ships seized in three days off Somalia.

The Swedish Maritime Patrol aircraft has been very busy in spotting and directing EU forces to areas where suspected "pirate action groups" are collecting. 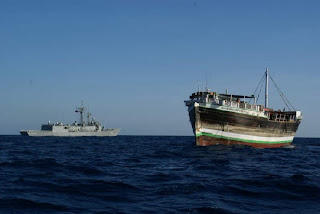 UPDATE: Saturn5 has a report on a Turkish frigate rescuing some Indian sailors, a Danish-flagged merchant ship and forcing Somali pirates to run for cover ashore in Somalia here. Well done to F-493 TCG Gelibolu!
Posted by Mark Tempest at 4/06/2010 11:04:00 AM