Somlai Pirates: Grab a Ship and 21 Crewmembers Off Oman 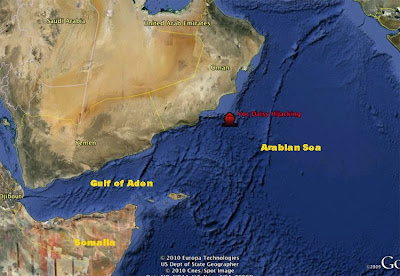 On the morning of 21April 2010, the Panamanian Flagged (Liberian owned) M/V VOC DAISY, a bulk carrier of 47,183 dead weight tonnes, was hijacked in the Gulf of Aden, 190 nautical miles East South East of Salalah, Oman.

At the time of the attack, the MV VOC DAISY, owned by Middleburg Properties Ltd, Liberia, and operated by the Greek company Samartzis Maritime Enterprises, was heading west from Ruwais, U.A.E, making for the eastern rendezvous point of the International Recommended Transit Corridor (IRTC), for onward transit through the Suez Canal. She was 280 miles from the IRTC when she was hijacked. 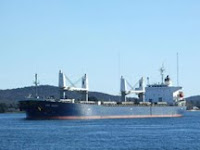 MV VOC DAISY was registered with Maritime Security Centre Horn Of Africa (MSCHOA) and was able to raise the alarm before the four armed pirates, carrying three AK47s and one RPG, stormed onboard and cut their lines of communication.

EU NAVFOR is monitoring the situation and can confirm that all the 21 Philippino crew of the MV VOC DAISY are safe.