The Power of One State: Arizona's New Immigration Bill 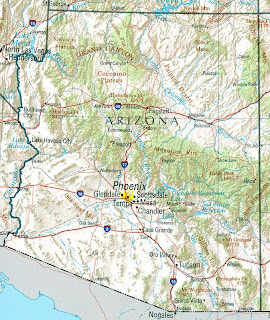 I guarantee this will be a really interesting legal battle over the right of a single member state of the United States of American to control undocumented aliens as Arizona Clears Strict Immigration Bill.

It is almost certain that the federal government, under its current leadership, will oppose one or more states bordering on Mexico from asserting their own rights in controlling access by illegal aliens who cross over that border.

The usual federal response to states asserting sovereign rights has been to threaten to cut off federal funding for various projects like highways, education and the like - buying the state into compliance using the argument that the Commerce Clause* covers such matters because the Supreme Court has given that clause very broad scope.


Here, however, the southern border states have legitimate concerns over border security and the federal government has not been able or willing to enforce federal laws against illegal access to this country across the borders with Mexico.


Naturally, "rights groups" are all upset, as reported here and here:


"Dozens of people rallying Wednesday at the State Capitol urged Gov. Jan Brewer to veto a bill that would require local law enforcement to assist in enforcing federal immigration law"

See a "fact sheet" on the bill here. And the bill itself here. You might note that the underlying law to be enforced is federal law.

Almost certainly the 10th Amendment will come into play:

The powers not delegated to the United States by the Constitution, nor prohibited by it to the states, are reserved to the states respectively, or to the people

UPDATE: Is immigration mentioned in the Constitution? Not directly, but Art I, Section 8 provides Congress has the power "To establish an uniform Rule of Naturalization" which the Supreme Court has ruled covers immigration (here)...

UPDATE2: Here is an opinion piece.

UPDATE3: A roundup of views - all of which point out why this will be some Constitutional fun down the road:


My view is that Geraldo is simply incorrect (once again)in his Constitutional knee jerk reaction. There's no trampling on federal "supremacy" if you are simply enforcing existing federal law that the feds are not enforcing. In fact, I want to see that argument fleshed out. Take your best shot in the comments.

To me it looks like Arizona is actually complying with federal law and some assistant attorney general is going to have to get creative in arguing that is somehow unconstitutional.

I suppose you could argue that the law will have a disparate impact on people appear to be, well, Mexican in that undoubtedly fewer Nordic type blonds will be asked to show some sort of identity proof.

This all could have been avoided with tighter border controls. As it is, it seems unfair to be able to ask a foreign person who has legally entered the country for his/her passport as they travel and not be able to ask the same of a person who sneaked across the border. Especially if you find the latter on some rancher's land out in the middle of nowhere (but near the border)or involved in a crime or in an accident.

*Article I, Section 8. The Congress shall have power ... To regulate commerce with foreign nations, and among the several states...