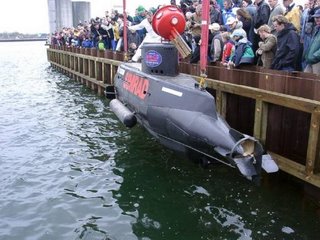 Just the other day I was discussing with a friend that whatever thing you can think of, there is probably someone who has made a hobby of it. You know, collecting toast with images of Brittany Spears burned into it, and that sort of thing. I suppose, therefore, that I should not have been stunned to learn that there are hobbyists who build and operate homebuilt submarines. But I was, especially when they were called upon to critique the crude (now captured submarine) recently interdictedby the Coast Guard. It is all reported here:

"The captured drug-sub appears to be amateurish in construction and not nearly as seaworthy as the subs we have seen, designed and built," said Jon Wallace, a software engineer for Hewlett-Packard in Weare, N.H. In 1996 he cofounded the Personal Submersibles Organization, which now counts about 13,000 visitors per month to its Web site, psubs.org.

"Semi-submersible at best," sniffed another critic in a posting on the group's site.

After reading reports and seeing photographs of the captured vessel, hobbyists concluded that the gray drug craft was crudely constructed and not a serious attempt at building a submarine. Some said it was more a boat meant to blend into the water, skim just below the surface, travel long distances and avoid radar detection. A giveaway was that it was made of fiberglass -- which is generally not a good material for building a submersible vessel, they say. It also had a squarish design rather than the cylindrical shape required to withstand pressure and stress.
***
Some sub enthusiasts question why smugglers would use a submarine in the first place since subs are slow and must surface. "I could see somebody towing a submersible below a cargo ship," wrote one on the psubs.org Web site and electronic mailing list. George Slaterpryce, 28, a software engineer in Ocala, Fla., suggested that "a true smuggling submarine" would "have to be something that cruises at 60 feet or so (just deep enough not to be easily noticed)," be constructed of lightweight materials and powered by a relatively silent motor and have enough air for days of submersion.