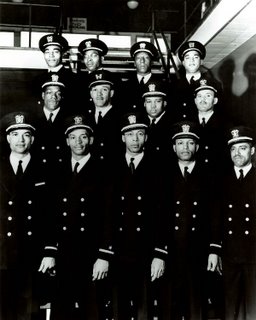 Family and friends bid farewell to Frank Ellis Sublett Nov. 12 at a memorial service in Chicago, honoring the last member of the first group of African-American men to receive commissions as officers in the U.S. Navy.
***
The man who wrote the 1993 book of recollections of the Navy’s Golden 13 gave Sublett’s eulogy. Author Paul Stillwell said that during the writing of the book, “I came to know what real heroes and pioneers these men were.”

In the book’s forward, Gen. Colin Powell points out that, “…from the very beginning, they understood…that history had dealt them a stern obligation. They realized that in their hands rested the chance to help open the blind moral eye that America had turned on the question of race.”

Offer up a salute to these men, who paved the way so that we take for granted scenes like this: 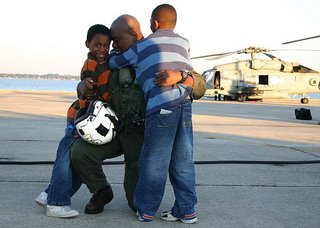 Lt. Michael Jackson embraces his sons on the pier during the homecoming of Helicopter Antisubmarine Squadron One One (HS-11) the “Dragon Slayers”. HS-11 returned to Naval Air Station Jacksonville following a scheduled six-month deployment on board USS Enterprise (CVN 65) in support of maritime security operations and the global war on terrorism. U.S. Navy photo by Mass Communication Specialist 2nd Class Susan Cornell