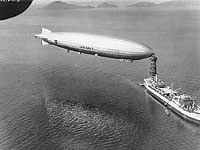 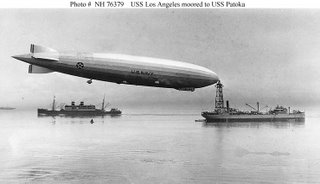 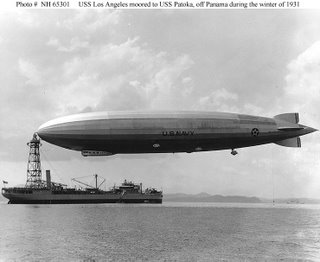 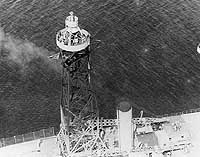 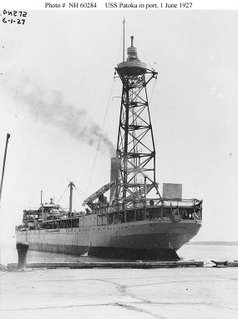 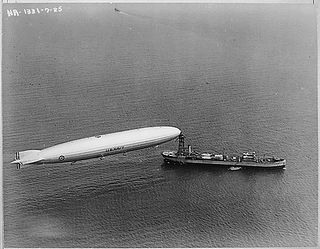 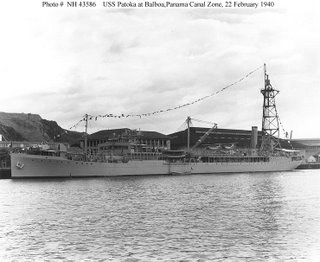 For a short period of time, the U.S. Navy operated 5 airships. Along the way the Navy found the need to have an experimental sea base for the dirigibles. This idea turned an oiler, USS Pakota (AO-9) into an unusual ship with mooring mast at its stern (and a little space for seaplanes). The underlying history is here:

USS Patoka, a 16,800-ton oiler, was built at Newport News, Virginia. Commissioned in October 1919, she transported oil fuel from the United States to European ports during the next few years, as well as performing other support services in both the Atlantic and Pacific. In 1924 Patoka was modified as a tender for the Navy's rigid airships, receiving a distinctive mooring mast on her stern and facilities for handling seaplanes. She was subsequently used as an operational and experimental base by three of the Navy's great dirigibles, USS Shenandoah (ZR-1) in 1924-1925, USS Los Angeles (ZR-3) in 1925-1932, and USS Akron (ZRS-4) in 1932.

Decommissioned in August 1933, following the loss of Akron, Patoka remained in reserve for six years. Reclassified as a seaplane tender (AV-6) in October 1939, she was recommissioned a month later and served briefly in that role, primarily in the Atlantic area. In June 1940, she returned to her original mission as an oiler, and was again designated AO-9. By late 1941, after carrying oil and other cargo in the Atlantic and Caribbean areas during the previous year and a half, Patoka had taken station at Recife, Brazil. She served there for most of World War II as a supply and repair ship for U.S. Naval forces operating in the South Atlantic. She also was employed as a personal and logistics transport during this time, and in early 1942 patrolled off Brazil in an effort to intercept enemy ships bringing vital cargo from the Japanese Empire to Europe.

In 1945 Patoka was refitted to serve as a tender for minecraft in the Pacific. Given the new hull number AG-125 in August, she spent the last four months of the year, and the first part of 1946, supporting mine clearance and other aspects of the occupation of Japan.

A salute to the officers and men of Patoka for their faithful service during some interesting times.
Posted by Mark Tempest at 11/05/2006 06:22:00 PM