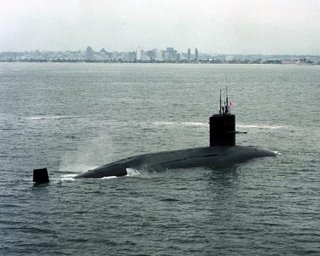 A Japanese military submarine collided with a civilian vessel during exercises off southern Japan on Tuesday, officials said.

The Maritime Self-Defense Forces submarine brushed against a tanker carrying chemicals as it surfaced about 30 miles (50 kilometers) off the southeastern coast of Miyazaki, on the southern island of Kyushu, a defence agency spokesman said on condition of anonymity by protocol.

None of its crew of 16 Philippine nationals and a South Korean was hurt, but the extent of the damage was not immediately known, he said.

The ship's captain later reported to the regional Japan Coast Guard that it was taking on water, said another JCG spokesman Masao Sonoda. There was no danger of it sinking, however.

Image is of a generic Japanese Maritime Self Defence Force submarine Yushio class.
Posted by Mark Tempest at 11/21/2006 10:04:00 AM