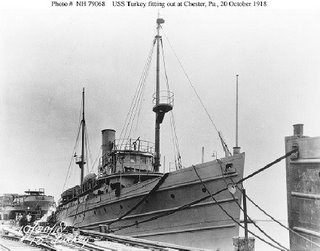 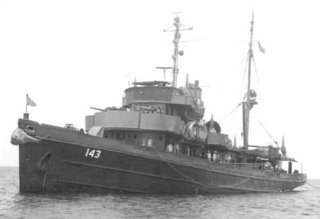 The U.S. Navy used to be consistent in naming ships in a certain way - battleships had the names of various states (USS North Carolina, USS Texas, cruisers were named after cities (USS Chicago, USS Houston). Down among the smaller ships, the minesweepers were named in a less high-falutin' way- they were named after birds.

In 1918, Minesweeper No. 13 was commissioned as USS Turkey, as set out here, and began an interesting career:

Although completed too late to see service during World War I, Turkey took part in the gigantic operation to clear the mine barrage which had been laid in the North Sea during this conflict. This system of mine fields constituted a formidable obstacle to the resumption of trade in the aftermath of the war. After steaming across the Atlantic, the new minesweeper ...joined the American forces massing there to begin clearing the shipping lanes between Scotland and Norway.

Soon thereafter, Turkey got underway for minesweeping operations in the North Sea. During her second operation... a mine exploded directly beneath Turkey on 16 May. The disabled minesweeper crept to Lyeness, at Scapa Flow, where she was dry-docked for repairs.

Her damage was corrected in time for Turkey to take part in the project's fifth operation ...

Fair weather conditions, unusual for the North Sea enabled the ships to make excellent progress. While thus engaged, Turkey fouled a mine in her sweep gear; and it exploded close aboard, causing minor damage. However the ship effected quick repairs at sea and continued operations without missing the proverbial step. By the 16th, Turkey's group had swept a record 1,373 mines.
***
Following her return to the United States, Turkey began operating out of New York in the waters of the 3d Naval District. On 17 July 1920, the minesweeper was designated AM-17 when the Navy adopted its modern alphanumeric system of hull numbers.

Turkey was laid up in 1922 but reactivated in 1938. Things got more exciting for the small ship:

As the Fleet shifted to Pearl Harbor in late 1939 and early 1940, Turkey followed and operated out of Pearl Harbor into 1941. On 7 December of that year, she lay moored in a nest of her sister ships at the Coal Docks at Pearl Harbor, when Japanese planes launched a surprise attack on the unsuspecting Pacific Fleet.

A Naval Reserve ensign, who had experienced only six months of sea duty, led the ship's defense until her commanding officer could return to the ship. The crew tumbled to battle stations at the sound of the general quarters alarm and quickly manned the main battery of two 3-inch guns. In addition, two Lewis guns atop the tall pilot house went into action. A number of riflemen armed with Springfield 1903 bolt-action rifles roamed the decks looking for good vantage points from which to fire at the attacking planes. Twenty minutes after the raid began, Turkey backed clear of the next ship to improve her field of fire and continued the fight.

Turkey's after action report can be viewed here. In Ensign Melchor's words:

1. On December 7, 1941, while in the capacity as Officer of The Deck, at about 0753, I heard an explosion followed by the noise of diving planes which, when sighted, proved to be Japanese. I immediately ordered general quarters and made preparations for getting underway.

2. At 0755 all guns were manned and opened fire on low flying dive-bombers approaching from the Southwest. The estimated number of this flight is eighteen planes. Five minutes later the second flight of about 18 dive-bombers passed overhead and out of gun bearing, headed toward Navy Yard, followed by nine torpedo planes following channel and passing over Hospital Point toward Navy Yard. About 0820, sighted flight of about twenty-five heavy bombers, estimated altitude 12000 ft coming from West, which dropped about seven bombs, landing in the West Lock Area.

3, The conduct of the crew was excellent. They responded immediately and efficiently.

His words speak of a well-trained crew, reminding us of the military truism that "you will not rise to the occasion, you will default to the level of your training."

Turkey continued its war operations, but underwent a change in mission and in 1944 was re-classified as an "old ocean tug" and its hull number changed to ATO-143. There then followed a period of activity helping resupply the fleet and making assisting various ships damaged by enemy action. As the war ended, so did her career and she was decommissioned and sold for scrap.

However, the Navy, in its infinite wisdom still had a Turkey on the books. This Turkey started life as YMS-444:

The second Turkey was laid down as YMS-444 on 16 November 1943 at Kingston. N.Y., by C. Hiltebrant Dry Dock Co., Inc.; launched on 20 July 1944; and commissioned on 26 December 1944, Lt. George H. H. Huey, USNR, in command.
***
On 20 July, she departed New York and, after a stop at Miami, steamed through the Panama Canal to the California coast, arriving at Los Angeles on 8 September. On the 17th, she set her course westward for Pearl Harbor and the Marshalls. Although the war was over when YMS-444 arrived in the Pacific, there were still enormous tasks left for the minesweepers. YMS-444 pursued her duties operating out of Saipan and Eni-wetok in October 1945. In November, she moved on to the Ryukyus and Japan, sweeping mines in the Kyushu-Korea and Honshu areas, and remained in Japanese waters into the new year.

On 24 February 1946, she departed Kure and set her course, via the Marianas and Marshalls, for Pearl Harbor and California. After pausing at San Pedro in April, she got underway for the Canal Zone on the 27th. It was 6 June before she departed the Canal Zone and set her course, via Charleston, for New York. She was decommissioned on 30 August 1946 and remained in the 3d Naval District as a Naval Reserve training ship.
***
For the next six years, YMS-444 operated out of New York ports and on the Great Lakes. On 1 September 1947, she was named Turkey and redesignated a motor minesweeper (AMS-56). She was placed in commission, in reserve, in April 1950, and she returned to active status on 21 November.

Turkey returned to the Atlantic in March 1952 and was assigned to serve with the Mine Forces, Atlantic Fleet, in August. During the following four years, she operated out of east coast ports with occasional voyages to the Caribbean. On 7 February 1955, she was reclassified an old coastal minesweeper MSC(O)-56. She arrived at Charleston on 9 November 1956 and was decommissioned there on 23 November 1956. Then, on 1 May 1957, she departed Charleston, steamed via New York, Halifax, and Montreal, and reported to the Commander, 4th Naval District, Toledo, Ohio, on 27 May 1957. 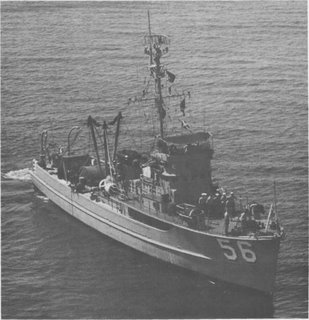 In 1960, Turkey was transferred to the 1st Naval District to continue as a Reserve training ship. As such, she operated out of Fall River, Mass., until September 1968 when she was replaced as a training ship by Jacana (MSC-193). Her name was struck from the Navy list as of October 1968, and she was sold in August 1969.

Was duty on a Turkey less exciting than on one of the big carriers or battleships? I suspect that, as is the case with most shipboard duty, they all had their moments. However, it's clear that both Turkeys provided long and useful service to the fleet and that all who served in them deserve our thanks and a salute.

My grandfather, Samuel Burl Neff, LCDR, USN, was stationed on board the ship on P H day. I believe he was a CWO at the time. He was home having sunday breakfast with the family at the start of the attack. Oral tradition of the family has it that my aunt Joanne (age six) went out to retrieve the sun paper and came back in the house and exclaimed "Daddy there are a lot of planes in the sky". My grandfather later became the CO of the USS Turkey (mid 1943). My grandfather enlisted in the USN in 1917. Prior to his enlisting, he had been a car mechanic. The Navy, in it's infinite wisdom, made him a HM (or it's equivalent back then). He later was able to change rate to MM. He retired in 1949 after 32 years service. He died in 1964 and is buried in Arlington National Cem.