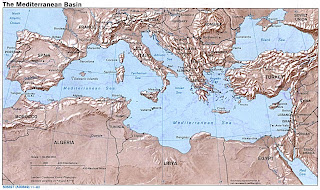 When greed, desperate people seeking a better life, and an over loaded boat meet you have a recipe for a disaster at sea. Like the one reported here:

Initial reports suggested that at least 300 — and possibly up to 500 — people may have perished.

Later, however, another official from the International Organization for Migration, Laurence Hart, said in a telephone interview from Tripoli, Libya, that the number of fatalities may have been lower than first thought.

One vessel carrying 356 migrants was towed back to Libya after reporting it was in difficulty. It was helped to safety by personnel on an oil-drilling platform who sent a rescue boat, Mr. Hart said.

A second vessel, carrying 257 people sank, he said, and up to 23 people were rescued. The rest were listed as missing some 30 miles offshore. Rescue operations by the Libyan authorities have been halted, Mr. Hart said.

Mr. Hart said there had been a huge exodus of would-be migrants from Libya in recent days. Some had landed in Italy, some had been intercepted and some had perished, he said..

Most of the migrants pay smugglers relatively large amounts of money for a place on the ships, but are often abandoned at sea. The vessels frequently are not seaworthy and do not carry life rafts. “They are mostly overcrowded which makes them unseaworthy and puts the people traveling on them at severe risk,” Mr. Hart said.