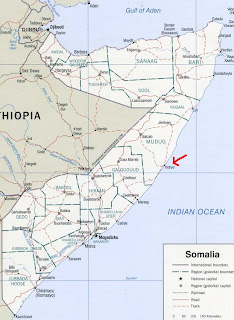 SOMALI pirates last night captured a tanker in a position 380 miles off Hobyo, according to reports from private security sources in the region.

The seizure was confirmed by the International Maritime Bureau’s piracy reporting centre in Kuala Lumpur, which did not release the name of the vessel.

An IMB official said that the ship was Greek-owned and Panama-flagged, and with 19 crew on board.

He warned that a pirate mothership is thought to be on the prowl in the waters off southern and eastern Somalia, an area with no coalition warships currently in place, after reports of ten attacks over the last ten days.

“The weather is favourable to the pirates and the desperately looking for ships [to hijack],” the official added.

While underway a general cargo ship sighted a mother vessel ahead launching two skiffs with length about 6-7m. The pirates were armed with automatic weapons. The skiffs chased the vessel and opened fire at it. The master increased speed, activated fire hoses, fired rocket flares and made evasive manoeuvres which prevented the pirates from boarding. The vessel sustained some damages but continued passage. Crew and vessel safe.

I would think that merchant shipping should proceed with extreme caution on routes into Kenya and through the normal sea lanes around northern Madagascar. There have been at least 7 pirate attacks in the Indian Ocean area off Somalia (200-500 nm) since March 11, 2009.

UPDATE2: Traded out maps. Hobyo indicated by red arrow.
UPDATE3: Pirate attacks off the East Coast of Somalia in 2009 (click to enlarge): 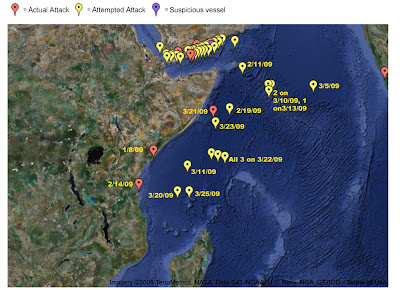