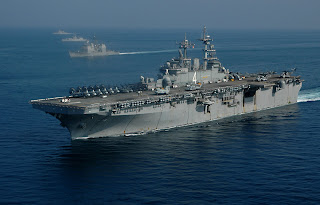 Along with a Navy helicopter detachment, Boxer also has embarked Marines from the 13th Marine Expeditionary Unit, which includes several types of combat aircraft from Marine Medium Helicopter Squadron 163 (reinforced).

The task force is commanded by Rear Adm. Terry McKnight.

Established in early January, CTF 151's mandate is to deter and disrupt piracy in the Gulf of Aden, Arabian Sea, Indian Ocean and the Red Sea and currently includes naval forces from the United States, United Kingdom, Denmark and Turkey.

McKnight said that CTF 151 has coordinated with many nations to help thwart piracy in the region.

"We bring unique and very effective tools to the theatre to accomplish any mission or assignment," he said. "Whether it's humanitarian assistance or counter-piracy operations, we're ready."