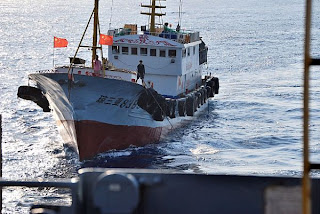 "We view these as unprofessional maneuvers by the Chinese vessels and violations under international law to operate with due regard for the rights and safety of other lawful users of the ocean," Whitman said.

A civilian crew mans the ship, which operates under the auspices of the Military Sealift Command.

Crewmen aboard the Impeccable used fire hoses to spray one of the vessels as a protective measure. The Chinese crewmembers disrobed to their underwear and continued closing to within 25 feet.

The Chinese vessels dropped pieces of wood in the water directly in the Impeccable's path, and two of the ships stopped directly in the U.S. vessel's path, forcing it to stop.

Whitman said the Chinese used poles in an attempt to snag the Impeccable's towed acoustic array sonars. Impeccable's master used bridge-to-bridge radio circuits to inform the Chinese ships in a friendly manner that it was leaving the area and requested a safe path to navigate.

"These are dangerous close maneuvers that these vessels engaged in," Whitman said. 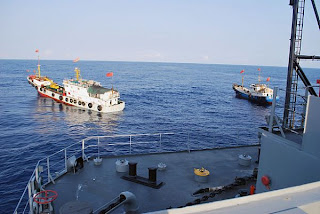 The incident was the culmination of earlier harassment. A Chinese patrol vessel shined a high-intensity spotlight March 4 on the USNS Victorious operating in the Yellow Sea 125 miles from China's coast. Chinese maritime aircraft "buzzed" the ship 12 times March 5.

An unnamed spokesman for the Chinese embassy in Washington denied the Chinese ships had violated maritime rules and said U.S. ships had been conducting illegal surveying, the website of Hong Kong-based Phoenix Television (news.ifeng.com) reported.

"China believes this contravenes international laws of the sea and China's relevant laws."

Of interest is that the Chinese are asserting a violation of their "exclusive economic zone" a concept developed under the United Nation Convention on the Law of the Sea (UNCLOS) Art 55, et seq:

Specific legal regime of the exclusive economic zone
The exclusive economic zone is an area beyond and adjacent to the territorial sea, subject to the specific legal regime established in this Part, under which the rights and jurisdiction of the coastal State and the rights and freedoms of other States are governed by the relevant provisions of this Convention.

Article56
Rights, jurisdiction and duties of the coastal State in the exclusive economic zone
1. In the exclusive economic zone, the coastal State has:
(a) sovereign rights for the purpose of exploring and exploiting, conserving and managing the natural resources, whether living or non-living, of the waters superjacent to the seabed and of the seabed and its subsoil, and with regard to other activities for the economic exploitation and exploration of the zone, such as the production of energy from the water, currents and winds;
(b) jurisdiction as provided for in the relevant provisions of this Convention with regard to:
(i) the establishment and use of artificial islands, installations and structures;
(ii) marine scientific research;
(iii) the protection and preservation of the marine environment;
(c) other rights and duties provided for in this Convention.

3. In exercising their rights and performing their duties under this Convention in the exclusive economic zone, States shall have due regard to the rights and duties of the coastal State and shall comply with the laws and regulations adopted by the coastal State in accordance with the provisions of this Convention and other rules of international law in so far as they are not incompatible with this Part.
***

The U.S. is not a party to UNCLOS. Under UNCLOS Part II, Section 2, Article 3, a nation's territorial waters extend 12 miles. In that 12 mile territorial waters, there is a right of "innocent passage," though certain acts are forbidden:

1. Passage is innocent so long as it is not prejudicial to the peace, good order or security of the coastal State. Such passage shall take place in conformity with this Convention and with other rules of international law.

2. Passage of a foreign ship shall be considered to be prejudicial to the peace, good order or security of the coastal State if in the territorial sea it engages in any of the following activities:

Note the there is a distinction between the restriction of activities in the territorial waters (12 miles) and those of the much larger EEZ (200 miles max).

A crewmember on a Chinese trawler uses a grapple hook in an apparent attempt to snag the towed acoustic array of the military Sealift Command ocean surveillance ship USNS Impeccable (T-AGOS-23). Impeccable was conducting routine survey operations in international waters 75 miles south of Hainan Island when it was harassed by five Chinese vessels. (U.S. Navy photo/Released)

Two Chinese trawlers stop directly in front of the military Sealift Command ocean surveillance ship USNS Impeccable (T-AGOS-23), forcing the ship to conduct an emergency "all stop" in order to avoid collision. The incident took place in international waters in the South China Sea about 75 miles south of Hainan Island. The trawlers came within 25 feet of Impeccable, as part of an apparent coordinated effort to harass the unarmed ocean surveillance ship. (U.S. Navy photo/Released)