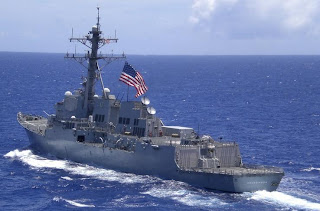 The Navy on Wednesday assigned a destroyer escort to the ship that narrowly missed colliding with the Chinese vessels Sunday.

A defense official, speaking on background, confirmed Wednesday that the destroyer Chung-Hoon is keeping a close eye on the surveillance ship Impeccable, which continues to operate in the South China Sea.

The Impeccable, which is unarmed and manned by civilian mariners, deploys and tows sonar equipment used to locate and track submarines. American officials contend the ship has been careful to stay in international waters.

The United States says five Chinese vessels approached the Impeccable, ignoring requests to keep their distance, and that one got so close that the Americans employed fire hoses to repel it.

The new U.S. effort to protect the ship came as Secretary of State Hillary Rodham Clinton and Chinese Foreign Minister Yang Jiechi conferred at the State Department, their second meeting in less than a month.

USS Chung-Hoon (DDG-93) homepage. The ship is named after a 1934 US Naval Academy grad and WWII hero. 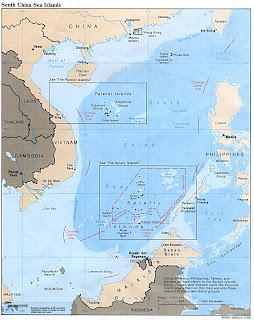 China’s bold and dangerous maneuvers against the USNS Impeccable, a U.S. Navy military survey vessel, which was operating about 120 km from the island of Hainan in the East China Sea is the latest salvo in China’s ongoing campaign to upset traditional notions of freedom of navigation in order to deny access to its coastal waters, or littorals, by foreign warships, and aircraft . . .
***
Although coastal states have exclusive rights to exploit natural resources in the zone, they cannot claim a security interest in the area, agreed Shen Dingli, director of the Center of American Studies at Shanghai’s Fudan University. Regardless, China wants to exert control that extends beyond its economic interests, creating the potential for conflict with the U.S. Navy. Dingli stated, “China considers that international law only allows innocent passage for military vessels [in the EEZ], not activities that could be considered to have a military purpose.”