Somali pirates appear to have grabbed another tanker (see here) off Somalia's east coast as set out here:

Pirates armed with machine guns pursued and captured a Norwegian chemical tanker off the coast of Somalia on Thursday, the owners said, less than 24 hours after a smaller Greek-owned vessel was seized in the same area.

The U.S. 5th Fleet, which patrols the pirate-infested Gulf of Aden, confirmed both hijackings and said they happened in the same area but separate from the gulf, one of the world's busiest — and now most treacherous — sea lanes.

The 23,000-ton Norwegian-owned Bow Asir was seized 250 miles (400 kilometers) off the Somali coast on Thursday morning, and the 9,000-ton Greek-owned Nipayia, with 19 crew members, was attacked about 450 miles (720 kilometers) off Somalia on Wednesday afternoon, the European Union's military spokesman said.

Norway's shipowner's association said the Bow Asir had a crew of 27 with a Russian captain, but the 5th Fleet said there were 23 crew on board. Fleet spokesman Lt. Nate Christensen said the Norwegian ship was Bahamian-flagged, but he did not know its cargo. U.S. Cmdr. Jane Campbell confirmed the hijacking on Wednesday of the Nipayia.

A Nairobi-based diplomat said the Nipayia had 18 Filipinos on board and a Russian captain. He said the ship is managed by Athens-based Lotus Shipping, speaking on condition of anonymity because he was not authorized to speak to the press.

The owner of the Norwegian Bow Asir, Salhus Shipping AS, said it received a security alert message from the Bow Asir at 0729GMT saying the ship was being chased by two small boats with suspected pirates on board. 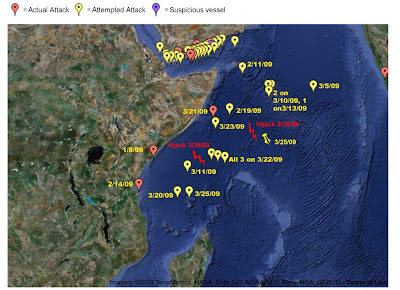