2008 Was Good Year to Be a Somali Pirate 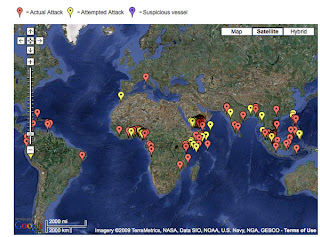 International Maritime Bureau 2008 Piracy Report, as reported here shows a steep increase in maritime hijackings in 2008, most of which occurred in the waters off Somalia: 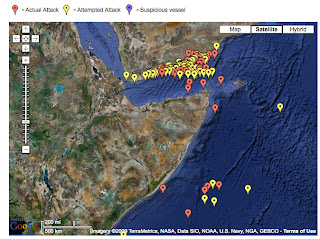 The increase is attributed to the number of attacks in the Gulf of Aden with 111 incidents reported on the east coast of Somalia and the Gulf of Aden. The rise peaked in September with 19 attacks. In October and November there were 15 and 16 vessels attacked respectively. This is an increase of nearly 200% from 2007.
*** 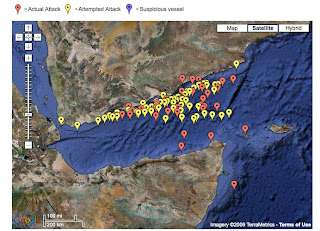 Nigeria ranked second in the report with 40 reported incidents including 27 vessels boarded, five hijackings and 39 crew members kidnapped. The PRC is also aware of approximately 100 further unconfirmed incidents that have occurred in Nigeria. Under-reporting from vessels involved in incidents in the Nigerian waters remains a great concern.

The Strait of Malacca and the waters off Indonesia, formerly piracy hotbeds, have seen dramatic reductions due to patrols and other efforts aimed at slowing piracy.

The maps, grabbed from the IMB/ICC CCS Live Piracy Maps site represent a drill down in piracy reports from a global perspective to the waters off Somalia to the Gulf of Aden.

You might recall that the IMB uses a definition of piracy that ranges from people climbing onto to anchored ships and stealing small items to the capture of entire ships.

UPDATE: Jane from Armies of Liberation (she sure makes the Yemeni government mad), sends along a link to a series of photos of pirates in the Gulf of Aden from the Boston Globe website.
Posted by Mark Tempest at 3/18/2009 09:37:00 AM