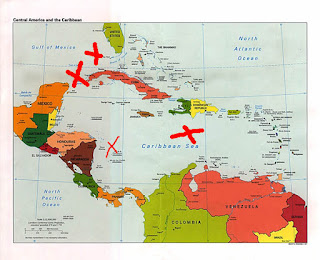 Iran is increasing its presence in Latin America, and Hezbollah, a terrorist organization it sponsors, is making inroads in drug trafficking in Colombia, the commander of U.S. Southern Command told Congress today.
Navy Adm. James G. Stavridis told the House Armed Services Committee he shares concerns expressed by Defense Secretary Robert M. Gates about Iranian activity in Central and South America. Iran has opened six embassies in the region during the past five years and is promoting Islamic activities in the region.

“That is of concern, principally because of the connection between the government of Iran, which is a state sponsor of terrorism, and Hezbollah,” Stavridis said today. “We see a great deal of Hezbollah activity throughout South America, in particular.”

Much of that activity takes place in the tri-border area of Brazil, Paraguay and Argentina, and in the Caribbean.

Two months later, Southcom supported another interagency operation in which several dozen people were arrested in Colombia for ties to a Hezbollah-connected drug trafficking and money laundering ring.

Despite big successes in professionalizing the Colombian military and helping it deal with the Revolutionary Armed Forces of Colombia, or FARC, Southcom has witnessed a direct connection there between Hezbollah and drug trafficking in Colombia, Stavridis told the committee.

He noted the direct link between the illicit drug trade and the terrorist groups it bankrolls, noting the threat posed by Islamic radical terrorism.

“Indentifying, monitoring and dismantling the financial, logistical and communication linkages between illicit trafficking groups and terrorist sponsors are critical to not only ensuring early indications and warnings of potential terrorist attacks directed at the United States and our partners, but also in generating a global appreciation and acceptance of this tremendous threat to security,” he said.

Stavridis called Colombia – the major global source of cocaine and home of the FARC – pivotal in the fight to stop illicit traffickers at the source.

ADM Stavridis is not alone in his concerns. Iran has been messing around with Nicaragua for some time. And it's winning them friends among the "we hate America crowd" - as seen here:

The U.N. General Assembly president accused the United States on Tuesday of "demonizing" Iranian President Mahmoud Ahmadinejad in the latest blast against Washington by the former Nicaraguan official. 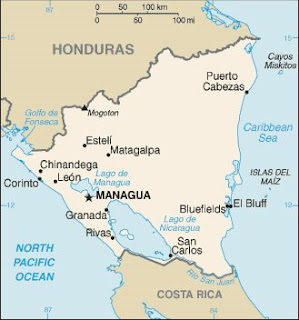 "I don't think anyone can doubt that in our part of the world, concretely here ... Ahmadinejad has been demonized," Miguel D'Escoto Brockmann told a news conference.

Ahmadinejad caused outrage in the West by saying in 2005 that the state of Israel should be wiped off the map. He has also questioned the Holocaust and promoted a nuclear program the West suspects aims to produce atomic weapons. Tehran says the program is for peaceful purposes.

D'Escoto said that "the United States has been in the business of the demonization of people from (for)ever," but had "canonized" former Philippine dictator Ferdinand Marcos, former Nicaraguan dictator Anastasio Somoza and former Chilean dictator Augusto Pinochet.

"And then we hear terrible things about Ahmadinejad," D'Escoto said at the news conference on a recent trip to Syria, Finland, China, Bahrain, Switzerland and Iran to promote a U.N. conference in June on the world financial crisis.

Yeah, well, maybe we could agree on Hitler and Stalin?