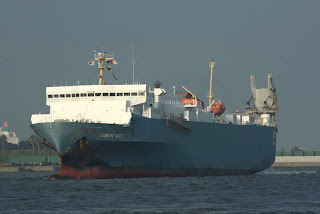 In recent weeks, as the number of military vessels patrolling the Gulf of Aden continues to grow, there have been an increasing number of attacks reported 400 to 500 miles off the east coast of Somalia (see here) including a recent attack on a Japanese owned car transport as set out here:

An automobile transport ship operated by Japanese shipping firm Mitsui O.S.K. Lines was attacked by what appeared to be pirate boats off the coast of Somalia on Sunday but managed to escape, the Japanese transport ministry said Monday.

The windows and ceiling in the car carrier’s pilothouse were hit by bullets, but no one on the ship was hurt, the ministry said. The vessel, registered in the Cayman Islands—a British overseas territory—had on board 18 crew members, all Filipino.

After the attack, which occurred at around 10 p.m. Sunday Japan time around 900 kilometers east off the coast of Somalia, the car carrier zigzagged for about 40 minutes and got clear of two boats that were chasing it, according to the Land, Infrastructure, Transport and Tourism Ministry.

Japan has sent two destroyers to the Gulf of Aden off the coast of Somalia to escort Japan-related commercial ships, including ones operated by Japanese shipping firms, through the pirate-infested gulf.

The Maritime Self-Defense Force destroyers are expected to begin the escort mission in the waters around March 30, several days earlier than previously planned.

UPDATE: See also this report of another attack in the Indian Ocean about 580 miles off Somalia.
UPDATE2: On the other hand, attacks still occur in the Gulf of Aden, as seen in this 20 March 09 NATO Shipping Centre report (click on it to enlarge) with 3 attacks,(one hijack) shown for 19 March. Attempts in gray: 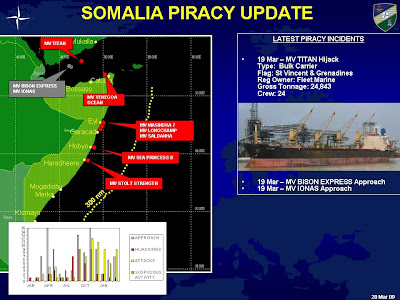